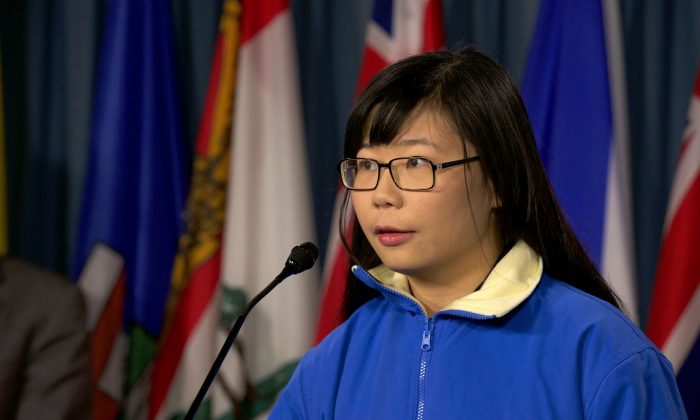 Hope Chen speaks to reporters on Parliament Hill on Dec. 9, 2015. The 22-year-old has been trying to draw attention to the plight of her father who was imprisoned in China for suing former Chinese leader Jiang Zemin. Chen was threatened by a Chinese agent for discussing his detention in the media. (Matthew Little/Epoch Times)
The Reader's Turn

Chinese Immigrants and the Long Arm of Beijing

With respect to the shooting death of a Chinese man in Paris recently, a Chinese Foreign Ministry spokeswoman urged French officials to “get to the bottom of the incident as soon as possible.”

According to news reports, the Chinese government and Chinese mafia groups are competing for influence over the sizeable Chinese community of Paris.

The tension among those Chinese immigrants must be constant.

In recent history, Mao Zedong is credited with causing the deaths of a minimum of 30 million people. Forty years later, hundreds and possibly thousands were killed by Chinese troops in the Tiananmen Square massacre.

Today, family members of overseas Chinese living in communist China can just disappear, especially if they attempt to raise awareness about forced organ harvesting or the ongoing campaign of persecution against the Falun Gong meditation discipline.

The Miss World pageant is largely funded by Chinese companies, so at the 2016 United States pageant, Ms. Lin was initially banned from speaking publicly or attending the premiere of “The Bleeding Edge,” a film she stars in.

These examples tell us that immigrants in similar situations must all fear the long arm of Beijing, even when they live in Canada or other Western countries. Someone is always watching.