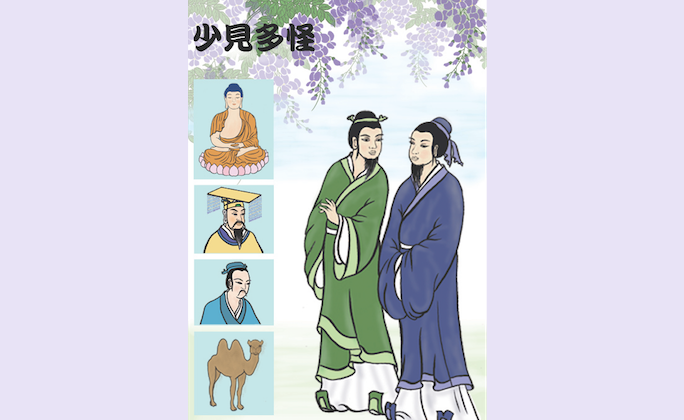 From a first-ever-seen camel to the many appearances of Buddha, if one hasn’t seen or experienced much, one is likely to be surprised. (SandyJean/Epoch Times)
Chinese Culture

Once upon a time, there was a man who had never seen or heard of a camel. One day, he went for a walk in a field near the road on the outskirts of town. It was a sunny day with many people working in the field and he enjoyed the scenery.

Suddenly, he saw a creature with two lumps on its back. He did not know what it was. He was so surprised that he shouted: “My God! What is it? Quickly, come and look at this thing!”

Hearing his surprised voice, people put down their tools and rushed to see what he had found. However, they did not see anything strange nor anything out of the ordinary.

One of them then asked, “Hey, you! What did you shout about?”

The man answered: “Look at this horse. It has two horrible tumors.”

Realizing that the man was referring to a camel, the people burst out laughing.

This story later became the idiom 少見多怪 (shǎo jiàn duō guài) to describe this kind of situation or someone who is very ignorant. Literally, it means “little seen, much surprised” and is translated as “surprised because of having seen so little.”

The expression was first found in a dialogue in the Buddhist text Treatise Settling Doubts(1) by Mou Rong(2), a famous Confucian scholar who converted to Buddhism, from the late Eastern Han period (A.D. 25–220).

In the dialogue, a questioner asks: “You mentioned Buddha has 32 special appearances and 80 detailed characteristics, which is very different from everyday human beings. How can that be?”

Mou answered: “The less one has seen, the more surprised one is; one could see a camel and take it as a horse with two tumors.”

The idiom is sometimes used to poke fun at those who announce a very common fact as a piece of amazing news. An equivalent English expression can be “Good call, Mr. Obvious,” which is often said sarcastically.