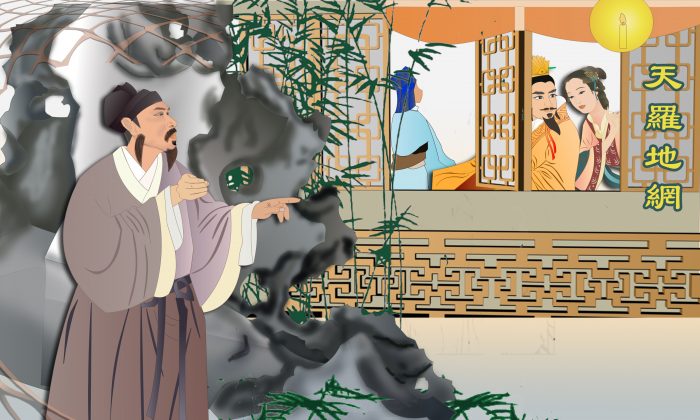 Jia Yi had to end his relationship with Li Shishi, whom he loved, because Emperor Huizhong liked her as well. (Catherine Chang/Epoch Times)
China

In the Northern Song Dynasty (A.D. 960–1127), Jia Yi and Li Shishi were lovers. Jia was a military attaché who was very handsome and known for his talent of writing poems. Li was a famous courtesan and very good at singing, dancing, and poetry.

They loved and appreciated each other.

Later, Emperor Huizong (A.D. 1082–1135) learned about Li Shishi and started to visit her. The emperor also enjoyed Li’s beauty and talent, so Jia had to end his relationship with her.

Heartbroken, Jia wrote a poem to express his feelings for Li and his jealousy toward the emperor.

The poem was discovered by a cruel minister named Gao Qiu who had Jia imprisoned. Jia was still grieving his lost love when he also lost his freedom.

In the 13th century book Old Incidents in the Xuanhe Period of the Song Dynasty,(1) the expression 天羅地網 (tiān luó dì wǎng) was used to describe Jia’s situation. Literally, it means nets above and snares below and is translated as a net from heaven to earth. Later, it became an idiom to describe when one is in a dangerous situation and has no recourse.