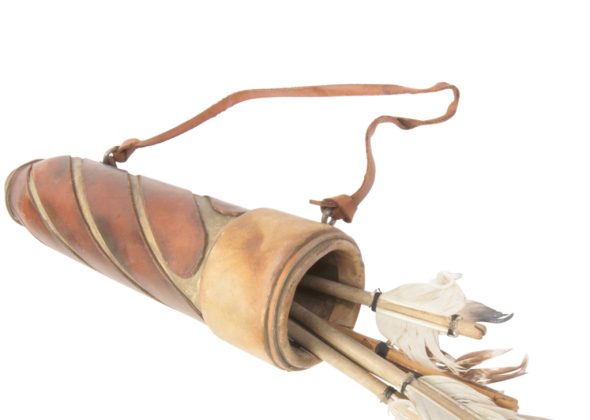 In the 3rd century, China was composed of three warring states: the Wei in the north, the Shu [Han] in the southwest, and the Wu in the south.

Since the Wei army was very powerful with large numbers of soldiers and weapons, the states of Shu and Wu became allies to resist this aggressor.

Zhuge Liang, the military adviser for the Shu state, went to plan a military strategy with Zhou Yu, lead general of the Wu state, to fight the enemy together.

However, Zhou Yu was very jealous of Zhuge Liang’s skills. While discussing strategy, Zhou asked, “What military weapons shall we use when we fight General Cao Cao’s armies on the river?” Zhuge answered, “Bows and arrows would be best.”

Zhou said, “Right, I share your view, but we are short of arrows. Can I trust you to make 100,000 arrows? This is really urgent work. I hope you will do me a favor and accept the assignment.”

Zhuge replied, “Certainly, I will honor your order and do it. May I ask when you need these arrows?”

Zhuge responded, “Well, since the battle is imminent, we shall fail if we take 10 days to make the arrows.”

Zhou was taken aback and said, “We are at the 11th hour and can’t afford to play games with each other.”

Zhuge answered, “No, I dare not joke at this critical moment. I would like to pledge: If I can’t make 100,000 arrows within three days, I am willing to be punished.”

Zhou was very happy to hear this. He had Zhuge write the pledge and then entertained him with good wine and food.

At the banquet table, Zhuge said, “It is already late today, so three days from tomorrow, send 500 soldiers to the riverside to collect the arrows.” After a few more cups of wine, Zhuge Liang left.

After Zhuge Liang accepted the assignment, he didn’t seem worried about fulfilling the order. He told Lu Su, a minister from the state of Wu who was friendly toward him, that it would be impossible to make so many arrows in such a short time using a conventional way. He then asked Lu Su to outfit 20 small boats and to assign 30 soldiers to each boat.

The boats were covered with black cloth and straw figures were constructed and aligned on each side of each boat. Zhuge repeatedly reminded Lu to keep his plan a secret. Lu assembled all the necessary materials for Zhuge but knew nothing about the plan.

Zhuge Liang had said he would have 100,000 arrows ready within three days, but on the first day he did not make any arrows and on the second day there was still nothing. The third day was approaching and there was still not a single arrow to be seen.

Everyone started to worry about Zhuge Liang. If he could not produce the arrows, he could lose his life. At midnight on the second day, Zhuge invited Lu to board one of the small boats and a surprised Lu asked why.

Zhuge answered that he wanted Lu to go with him to collect the arrows. Lu Su was totally confused and asked, “Where shall we go to get them?”

Zhuge smiled and said, “When the time comes, you will understand.” Then he gave orders to link the 20 boats together with ropes and they set off toward the Wei army camp.

There was a heavy fog that night. The thicker the fog became, the faster the boats advanced on the water, as ordered by Zhuge Liang.

When they approached the Wei camp, Zhuge gave orders for the boats to be placed in a horizontal line facing the river bank. His soldiers beat drums and shouted.

Lu Su was scared to death and said to Zhuge, “We only have 20 small boats and about 300 soldiers. If the Wei attack us, we are sure to be killed.”

But Zhuge said with a smile, “I bet that the Wei soldiers dare not attack in this heavy fog. We shall enjoy our drinks here.”

Wei’s general, Cao Cao, heard the drums and, shouting, ordered his troops not to attack because the heavy fog made it impossible to see the real situation. Instead, he ordered over 10,000 bowmen to shoot arrows toward the river to stop the enemy from coming too close.

As day started to break, the fog remained thick. Zhuge Liang told his soldiers to shout, “Thank you, Prime Minister Cao, for giving us so many arrows.”

Then, they immediately sailed back to the southern bank. Before Cao Cao realized that he had been duped, the current took the Shu boats up the river and soon they were more than six miles away—it was too late for Cao Cao to catch them.

When the boats arrived at Wu’s base, 500 of Zhou Yu’s soldiers were on the river bank waiting to collect the arrows. There were more than 100,000 arrows! Zhou Yu said, with a long and deep sigh, “Zhuge Liang had god-like foresight and an ingenious strategy. I am no match for him.”

Lu Su said to Zhuge Liang, “Sir, you are a spiritual being, not a human being! How did you know that there would be such heavy fog?”

Zhuge answered, “A general should know about astronomy, geography, divination, yin and yang principles, and battle formations, as well as the scope of the army, otherwise he is good for nothing.”

“I knew three days in advance that there would be a heavy fog today, which is why I dared to agree to the three-day deadline.”