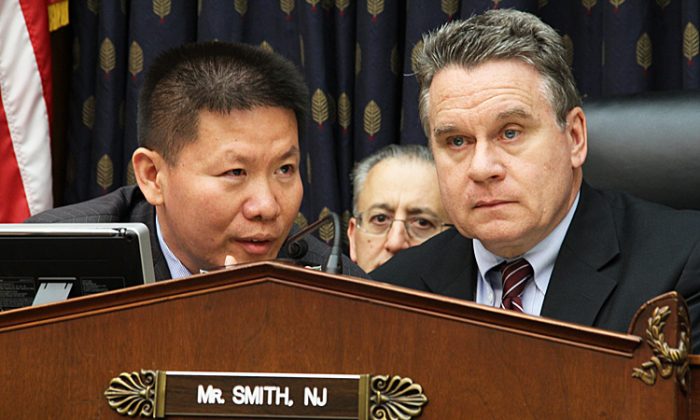 Standing up for religious freedom under the Chinese Communist Party (CCP) is no easy task, and Bob Fu, president and founder of China Aid, knows this all too well.

Fu began his journey as a student leader of the democracy movement in China, which came to a brutal end on June 4, 1989, during the infamous Tiananmen Square Massacre. Their peaceful chants were met with the regime’s brutality, and their hopes that the CCP could change were silenced by gunfire, and crushed beneath the treads of tanks.

According to Fu, he and others in the student movement were disappointed to see that “the so-called ‘people’s government’ would send the so-called ‘People’s’ Liberation Army to use tanks and machine guns to kill its own people.

This disappointment turned into disillusionment with the CCP, and Fu turned from hope in politics to faith in heaven.

“That’s how I became a follower for Jesus Christ, a Christian,” he said, and noted after turning to religion he came to realize that by its nature, the CCP aims to exert complete control over all society, and attempts to destroy anything without total loyalty to the party.

Switching from politics to religion also came with its costs, however. Under the communist system of the Chinese regime, religion is tightly regulated. During the Cultural Revolution, it launched campaigns to destroy temples and churches, killed priests, and established its own state-run versions of the religions that put the Party above heaven.

Fu refused to follow the state-run version of Christianity, and instead turned to the “house Christian” movement in China for those who still follow the religion as it exists outside China—a religion that the CCP still persecutes.

“My wife and I were then imprisoned,” he said.

Fu explained that religious people in China, including Christians and Catholics, “want to be independent in their faith” and to recognize God as the highest power, rather than be forced to place the Communist Party above God.

Seeing that they would not be able to practice their beliefs in China without facing imprisonment, or worse, Fu said he and his wife decided to leave China. And after facing persecution himself, he began to look towards others who faced similar persecution under the CCP.

He noted that in China, even human rights lawyers face harassment, torture, and imprisonment for trying to uphold the written Chinese law. Yet, like these human rights lawyers, Fu realized that when it comes to defending faith, “how can we be silent in the face of this kind of evil?”

It was that thought—a willingness to stand up not just for his own faith, but also for the faiths of others—that led Fu to create China Aid. He said it holds “a mission to advance religious freedom and rule of law for all in China by exposing abuses and persecution,” and by encouraging those who have been abused by the CCP to stand up for their freedoms.

The Communist Party is an atheist system, and it attempts to force this atheism on religions by requiring people to recognize no power higher than its own. Under the CCP, the Dalai Lama of Tibetan Buddhism is required to have government permission to reincarnate, pictures of communist leaders are hung in churches, and its demolition of temples and churches continues.

In churches, Fu said, “everybody is mandated to sing the national anthem, and the Church would have to take down the cross and have it replaced with a portrait of a chairman of CCP.”

He noted that last year in China’s Hunan Province, the CCP sent “a so-called religious affairs inspector” to investigate the churches. After seeing a copy of the Ten Commandments on a wall, the inspector declared it was not in line with Communist Party doctrine and demanded the removal of the First Commandment which requires Christians and Jews to place no God before their own.

Fu said, “the next day, the Ten Commandments became the Nine Commandments.” By the CCP removing the First Commandment, Fu questioned whether the regime’s altered version of Christianity can still be called Christianity.

While Fu has taken a stand for his own faith, and for his own right to believe, however, his organization also stands up for the rights of other faiths in China. He believes this is needed, and the joining of people of different beliefs to challenge religious persecution is helping them take a stronger stance against the tyranny of the CCP.

After he left China, and after “being accepted in this land of the free in the United States,” Fu said he began to realize that people of other faiths are also being persecuted by the CCP. He noted these include Tibetan Buddhists, Uyghur Muslims, and Falun Gong practitioners.

In addition, he said, “it is the right thing to do for our faith.”

“How can we turn a blind eye too by keeping silent when we see a Falun Gong practitioner, simply for practicing his or her own faith, he or she would be arbitrarily detained—would be tortured and many even tortured to death, and some even have their organs harvested alive?”

“It’s a crime against humanity,” he said. “We’re all created in the image of God. So as a fellow human being, this is fundamental, a human rights issue. That’s why we are much more powerful, stronger, if we are fighting together and join hands together.”

Fu said his organization in Washington aims to “send a strong message” to the CCP, that they will no longer tolerate the persecution, imprisonment, or torture of people for their faith, and they will also “fight for the freedoms of each other, so they cannot take advantage and divide us anymore.”