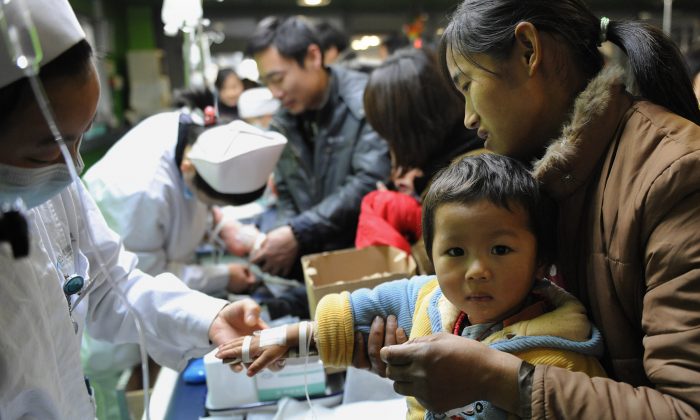 A group of Chinese children accompanied by their parents get treatment for flu at a hospital in Hefei, east China's Anhui Province, on Jan. 8, 2010.(STR/AFP/Getty Images)
China

A Chinese woman who suddenly found herself painfully in labor after 40 weeks of an otherwise uneventful pregnancy hurried with her husband to a hospital in the city of Nanchong, Sichuan Province in the morning of Feb. 5.

After a short stop in the the lobby, the woman’s husband rushed up to the gynecology and obstetrics department of the Nanchong Jialing No. 6 People’s Hospital to alert staff about his wife’s urgent condition.

Rather than arrange for doctors to help with the delivery, the nurse present at the department turned the couple down on the grounds that the hospital’s computer system was in the process of updating and that it would be impossible to register the birth or the mother’s hospitalization.

Under China’s strict family planning regime, every birth must be registered. Recently, couples were allowed to have a second child, but the documentation requirements continued.

The man, who called himself Chai Jun, according to the local Chinese publication West Metropolis Daily, became anxious and begged the nurse to have doctors help his wife deliver first before working out the bureaucratic formalities. The nurse refused and told him to take his wife to a different hospital.

Baby Declared Dead by Chinese Hospital Wakes Up in Morgue

Chai then helped his wife to another hospital, the Yingshan Hospital of Traditional Chinese Medicine, which happened to be nearby. His wife had to rest every few meters on the way.

Doctors discovered that the unborn child was suffering from lack of oxygen, and needed to be delivered via Cesarean section.

Despite a shortage of staff, Chai’s wife eventually gave birth successfully on Feb. 7.

Chai went back to the People’s Hospital to get an explanation from the staff about why they had rejected them earlier. Tan Guangfu, head of the gynecology and obstetrics department, apologized and told him that in truth, there were not enough staff on hand, though regulations say they should have taken her in regardless.

As a consolation, Tan told Chai that he would be welcome at the People’s Hospital if they had a second child. Chai turned him down, saying he wouldn’t be coming back.