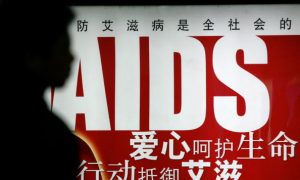 Chinese HIV-Positive Boy an Outcast in His Home Village

Residents of a southwestern Chinese village have petitioned authorities to remove an HIV-positive boy from their community, prompting discussion about AIDS and those affected by the disease in China.

According to mainland Chinese reports, over two hundred people from the village signed a petition requesting that the eight-year-old boy, referred to by the pseudonym of Kunkun, be quarantined by the authorities for treatment.

Living in Xichong County in the province of Sichuan, Kunkun was diagnosed with HIV when he was about five years old. He lives with his grandfather, as his mother and stepfather migrated to southern China’s Guangzhou Province to find work.

Among the signatures is that of Kunkun’s grandfather.

When Kunkun was diagnosed as being HIV-positive in 2011, his parents stopped sending money home to support his upbringing. When asked by a local paper why he signed the petition, Kunkun’s grandfather said that it was impossible for him to provide for his grandson. He also said that he had no news from Kunkun’s parents.

Whatever the failure of Kunkun’s family, his community hasn’t done much better. The boy has been expelled from his school, and parents refuse to let their children interact with him lest they too contract the HIV virus. One villager said Kunkun was a “time bomb.”

Kunkun spends much of his time playing alone on the streets. According to reports, he once set his home on fire. On another occasion, he started a fire at the village’s oil well.

Villagers pity Kunkun, said the village’s Party Secretary Wang Yishu, but “the fact that he has AIDS is too scary,” he said. “We don’t know what to do with him.”

The Chinese government says that hundreds of thousands of Chinese are HIV-positive, but the real number may be in the millions. Due to a lack of social support and education, those with the disease often experience discrimination.