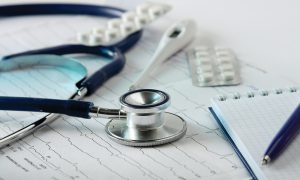 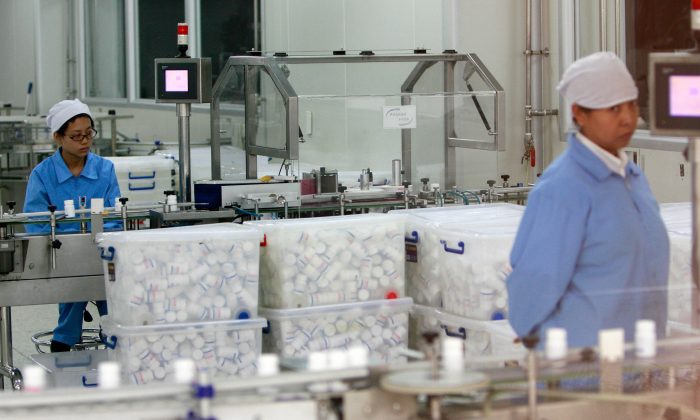 Chinese workers watch the production line of pill capsules at a factory in Beijing on Aug. 3 2007. The United States will help China improve the safety of its food and drug exports, the U.S. health chief said in a statement released on Aug. 3 after a string of health scandals surrounding Chinese-made goods. (Teh Eng Koon/AFP/Getty Images)
China Society

China’s Ministry of Public Security (MPS) recently ended a major investigation involving a health care fraud scheme that victimized more than 1,000 people in the country at a cost nearly 1 billion yuan (about $145 million). One victim spent more than 6 million yuan ($870,000) on the fake medical treatment.

The police arrested 132 people involved in the case, froze assets worth more than 70 million yuan, and seized more than 3,000 boxes of counterfeit drugs among numerous other items, Sina reported.

In 2014, Slender Group began its operations under the guise of various beauty salons located throughout China. It victimized rich and healthy women who could not speak or read in English. Once a client became a loyal customer of the salon and established trust with the owner, the owner would reward the client with a free luxury trip abroad.

The travel package included a free stay at a luxury resort, free medical seminars, and access to high-end medical centers that offered free health screenings and consultations. In all cases, the clients were falsely diagnosed and told they had a life-threatening illness. Since the victims didn’t know English, they were easily deceived by the false medical reports and were manipulated into buying expensive ersatz drugs produced by Slender Group.

Wang Lan, 53, a female entrepreneur, was one of the victims of Slender Group. Wang filed a report with the Jiaxing City police in January 2018, said Chen Shiqu, deputy director of the Criminal Investigation Bureau of the MPS. Wang claimed that between 2016 to 2017, she was swindled out of more than 600 million yuan by a beauty salon operating as a front for Slender Group in Jiaxing City, located in Zhejiang Province.

Because Wang was a loyal customer, the salon rewarded her with a free trip to a luxury resort in Thailand, where she received a medical screening and was told she had a high risk for cancer. Wang was convinced to buy an expensive drug called “cancer shield” and was told by the experts at the resort that it would protect her from getting cancer.

On April 24, 2018, the MPS deployed public-security agents in the provinces of Liaoning, Jiangsu, Guangdong, Heilongjiang, Jilin, Beijing, and Zhejiang and arrested 90 suspects.

After 42 more suspects were arrested in Hunan and Chongqing City in southwestern China, the criminal group was completely dissolved.

Zhang Limei, 50, is the head of Slender Group. A native of a Liaoning Province, Zhang has a masters degree and was once a college professor. Zhang started a beauty salon and earned more than 100 million yuan ($14.56 million) in 2008. In 2010, she created the Slender Group company and sold foreign beauty products to salons across China.

Chen said that since 2014, Slender Group was recruiting agents throughout China to set up beauty salons, which would be used as a front to lure people into their fraudulent medical scheme.

In 2014, Zhang’s beauty salon was transformed into an “overseas health care” operation. In 2015, the company began offering free trips to Thailand for select clients. Those who went on the trips stayed at luxury resorts and received Slender Group’s health package, including health seminars, medical screenings, and consultations.

The MPS said the experts at the medical facilities abroad were fake and not qualified as doctors. The anti-cancer drug, “cancer shield,” that was purchased by many clients, is mostly made of sugar, lycopene—a bright red carotene and carotenoid pigment, and phytochemical found in tomatoes and other red fruits and vegetables—and anthocyanidins, which are common plant pigments.

According to China Daily, “cancer shield” is marketed in a beautiful package, with the label “Cancer PRE” printed in gold. Each package contains 60 capsules or 120 capsules. The drug has four types, and the price ranges from 38,000 to 390,000 yuan ($5,530 to $56,900). Each capsule costs over 2 yuan (29 cents), while the cost of packaging is a bit more than the tablet itself—thus, the cost of manufacturing the drug does not justify the high prices. From every sale of the drug, the beauty salon got 50 percent of the profit, the agent and the company got 25 percent each.

The police said they didn’t suspect any criminal activity at Slender Group because it concealed its shady dealings from the start. Besides using the beauty salons as a front, the company would make it appear as though its drugs were made in the United States. It would first produce “cancer shields” in China, export them to the United States, and then import them into China with labels that say “imported from the U.S.”

Due to high medical costs, fake drugs, and poor medical services, people in China often look for medical treatment overseas. However, they are at risk from being deceived by fake medical services and drugs that are actually a product of corrupt Chinese companies, as seen in the case of Slender Group.

Slender Group is not the only health company that has come under fire for corruption. Recently, Quanjian Group, a traditional Chinese medicine firm, was caught using false marketing and was blamed for the death of a girl who had cancer. The firm’s founder, and 17 others involved in the case, were arrested Jan. 6, according to Reuters.