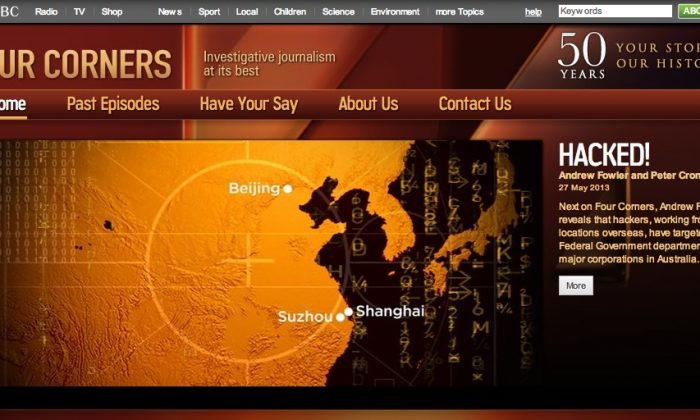 A screenshot from ABC's website showing the Four Corners investigative program about classified information reportedly stolen by Chinese hackers from government and businesses in Australia. (Screenshot via The Epoch Times)
China

Blueprints for the new headquarters of Australia’s intelligence agency, located in the capital of Canberra, have been stolen by Chinese hackers, according to the Australian Broadcasting Corporation.

The news, which hit hard in Australia on Monday night, comes less than two months after Australian Prime Minister Julia Gillard negotiated a “strategic partnership” with the Chinese Communist Party’s new leadership, and a subsequent Defence White Paper was released stating that the People’s Republic of China is no longer seen as a threat.

Four Corners reported that hackers got the top secret information about the Australian Security Intelligence Organization (ASIO) through a construction contractor.

Among the stolen documents were details of the building’s floor plans, security systems, cabling, and server locations.

The AU$630 million (about $606 million) building was due to open in April, but the cybertheft is reportedly one of the reasons behind the delay of its completion, and the fact that its original budget has been exceeded by more than AU$40 million.

Professor Des Ball at the Australian National University’s Strategic and Defence Studies Centre told the ABC that there are two options now that construction is almost finished.

“One is to accept it and practice utmost sensitivity even within your own headquarters,” he said. “The other [is] to rip the whole insides out and to start again.”

The ABC also reported that the Australian Defence Department’s classified email network had been breached, as well as the Department of Prime Minister and Cabinet, and the Department of Foreign Affairs and Trade. Chinese hackers reportedly also infiltrated several companies, including BlueScope Steel, and encrypted radio communications manufacturer Codan.

Australian Attorney-General Mark Dreyfus told the ABC that he had no comment on “operational or intelligence matters.”