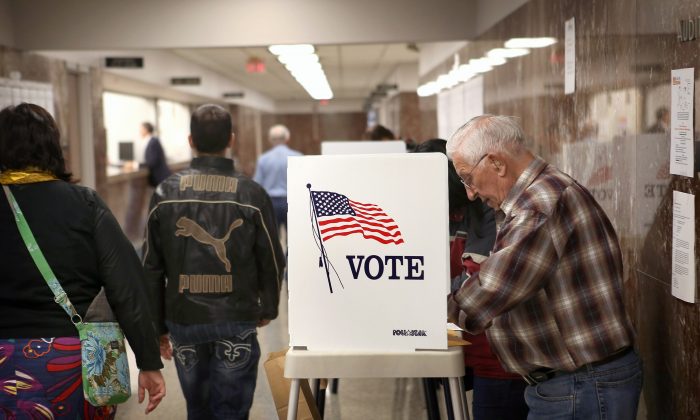 A voter fills out his ballot during the 2012 presidential elections. During the government shutdown in October 2013, the Federal Election Commission was hit by a large cyberattack by Chinese hackers. (Scott Olson/Getty Images)
China

Chinese hackers launched an attack against the Federal Election Commission (FEC) on Oct. 1 during the government shutdown, according to a report from the Center for Public Integrity.

The Center interviewed more than 50 staff members, former commissioners, and associates over a period of six months for its report. During the investigation, three government officials told them about the attack. The report states the attack was the largest sabotage the FEC suffered in its 38-year history

“They crashed computer systems that publicly disclose how billions of dollars are raised and spent each election cycle by candidates, parties and political action committees,” it states, noting the attack brought the FEC to a standstill.

A representative from the FEC declined to comment and referred inquiries to the Department of Homeland Security (DHS).

DHS spokesman S.Y. Lee confirmed the attack. Lee said via email that at the request of the FEC, the U.S. Computer Emergency Readiness Team (US-CERT) of the DHS is investigating the breach. He said the DHS is working with law enforcement to see if any damage was done, and to help prevent future attacks from happening.

“While the investigation is ongoing and no final determination has been made, at this point, there are no indications that any sensitive information or other personal data was compromised,” Lee said.

In fiscal year 2013, there were more than 228,700 “cyber incidents” against U.S. Federal agencies, critical infrastructure, and industry partners of the DHS, a DHS official told Epoch Times in an email. The attacks averaged more than 620 each day.

Security experts had warned that the government shutdown left the United States vulnerable to cyberattacks. News that the FEC was breached by Chinese hackers during the shutdown only verifies the concerns.

As federal agencies furloughed employees, information technology services were also affected. Security researchers at Trend Micro wrote on Oct. 7 that during the government shutdown “the government’s highly interwoven IT infrastructure could become much more vulnerable to opportunistic attacks.”

“[M]ost of Washington’s cybersecurity assets during the shutdown are being managed by skeleton crews, which may be ill-equipped to deal with the large volume of attacks on the public sector,” Trend Micro warned during the shutdown.

“While the Department of Homeland Security has been able to retain staff trained in cyberattack response, other outfits must wrestle with the prospects of unpredictable agency-by-agency rollbacks,” it stated.