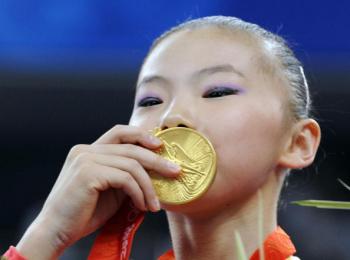 China's He Kexin kisses her gold medal after winning the women's uneven bars final on August 18, 2008. China's Yang Yilin won bronze. Both Chinese gymnasts are at the center of controversy for being underage for Olympic competition. (KAZUHIRO NOGI/AFP/Getty Images)
China

The document, first discovered by a search engine hacker who goes by the alias of stryde.hax lists birthdates and hometowns for hundreds of China’s gymnasts.

The document, a spreadsheet titled “2006 Nationwide Gymnastics Registration Table,” is dated February 20, 2006 and lists two members of China's women’s gymnastics, Yang Yilin and He Kexin, as being only 14 years old. To compete, a gymnast is required to turn 16 in the year the Games are held.

Epoch Times has unearthed similar document for 2005 on the same government server through Baidu cache, which also indicated same birthdates for He and Yang showing them 14 this year.

[caption id=”attachment_72441″ align=”alignleft” width=”320″ caption=”A cached document, which has been removed from the website of China