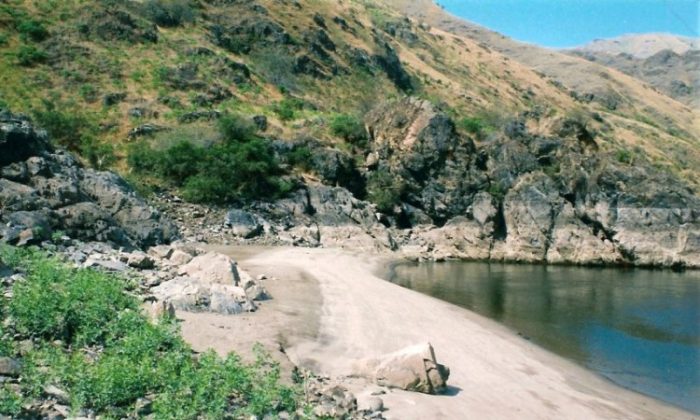 Site overlooking the Snake River in Oregon, where Chinese gold miners were killed in 1887. A simple granite memorial recognizing their lives will be installed at this site in 2012.(Courtesy of R. Gregory Nokes)
US

A memorial granite monument honoring approximately 34 Chinese gold miners who were killed in Northeast Oregon in 1887 will be placed at a site in Northeastern Oregon in 2012.

The miners from China were working at Deep Creek, along the Snake River in Hell’s Canyon in Wallowa County, Oregon when they were murdered by a gang of horse thieves and schoolboys, who took their gold, according to R. Gregory Nokes, author of “Massacred For Gold: The Chinese In Hell’s Canyon.” No one was held accountable. Only 12 of the miners were identified. In 2005, the area was named Chinese Massacre Cove.

Little had been known about this incident in Northwest history before Nokes starting researching it several years ago. He was working as a reporter with The Oregonian at the time. He was familiar with Oregon history, but had never heard of these events. After coming across historical documents that sparked his interest, he began reporting on it.

Nokes then wrote a book, feeling a need to honor the Chinese who contributed to the development of the West.

Nokes is also chair of the Chinese Remembering Memorial Project, a group of historians, teachers, tribal leaders, authors, museum curators, tour guides, and archaeologists in Northeast Oregon who have hosted a yearly conference, open to the public, since 2008 in Lewiston, Idaho, to remember the Chinese miners. It’s a “collaborative affair,” Nokes said. “We’ve brought the issue out of the shadows of the past.”

The conference includes lectures by historians and others, a visit to the site, and a ceremony to recognize the spirits of the Chinese miners, according to Nokes. The yearly conference has started the “process of healing,” he said.

Nokes believes that even though the miners have been forgotten by history, they should be remembered and their lives and contributions recognized.

The common goal of the memorial committee is to install a simple monument dedicated at the site to the miners who were killed. The granite marker will be placed overlooking the Snake River in Oregon at the next conference in June 2012.