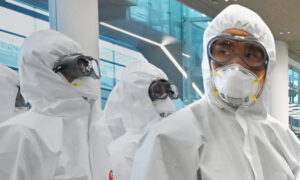 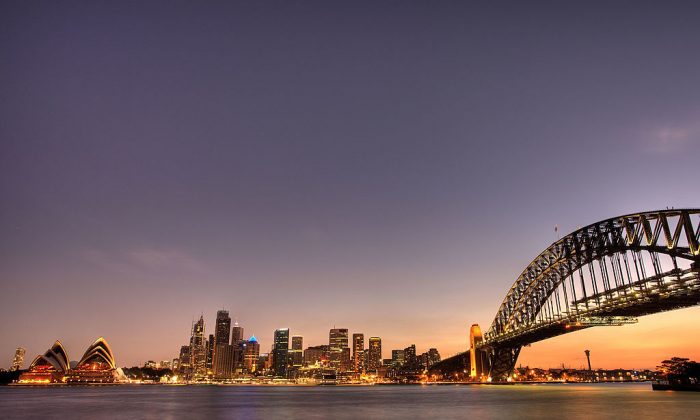 The Sydney Harbour Bridge, Opera House and Skyline is seen illuminated prior to the Earth Hour 2009 power switch off in Sydney, Australia on March 28, 2009. (Brendon Thorne/Getty Images)
China

Front operations of the Chinese Communist Party (CCP) are coming to light in Australia, where a stream of local media reports are exposing the CCP’s influence over the country’s news outlets, universities, businesses, and politicians.

The Weekend Australian reported on June 10 that Australian tax dollars are helping to fund the CCP’s weapons programs, through cooperation between Australian universities and Chinese military-linked, state-owned enterprises.

“The Australian Research Council is funneling Australian taxpayer funds into research with applications to China’s advanced weapons capacity through its linkage program,” it states.

This included a $400,000, three-year grant for a research partnership between the University of Adelaide and the Beijing Institute of Aeronautical Materials, which is part of the Aviation Industry Corporation of China.

The Aviation Industry Corporation of China, the newspaper notes, is a state-owned enterprise and “the main supplier of military aircraft to the People’s Liberation Army (PLA) air force, including the J-20 stealth fighter, the fifth-generation FC-31 stealth­ fighter, and attack drones.”

Australia’s intelligence agencies believe Huawei is linked to the Third Department of the PLA, the military’s cyberespionage arm.
— The Weekend Australian in a June 10 report

The Australian Research Council also gave $466,000 to a joint-research program between the University of New South Wales, the Australian subsidiary of multinational company National Instruments, and Chinese telecom company Huawei.

It notes that “Australia’s intelligence agencies believe Huawei is linked to the Third Department of the PLA, the military’s cyberespionage arm, which led [the Australian] government to place a ban on the use of Huawei equipment in Australia’s National Broadband Network.”

The Guardian reported on June 3 that the University of Technology Sydney launched a joint center for advanced science and technology research in April. The partner and funder of the center is China Electronics Technology Group Corp.—one of China’s largest state-owned enterprises and fastest-growing defense companies.

While much of this would be illegal in the United States, it is allowed under Australian law.

The CCP is also increasing its influence over the Chinese communities in Australia, and The Financial Review reported on June 8 that “in Australia, as elsewhere, China’s state media have made significant inroads into the space of Chinese-language media over the past few years. “

Using these inroads, it states, the CCP’s “main purpose” is to “reduce or even eradicate the ‘bias’ and ‘prejudices’ against China that are seen as pervasive in Western media.”

Australian politicians have not been left out of the CCP’s efforts. The Age published a three-part investigative series detailing several facets of the CCP’s growing influence in Australia, including how “Australia’s major political parties have accepted millions of dollars in donations from two key Chinese businessmen,” and how these politicians have shifted their public lines on China policy.

While much of this would be illegal in the United States, it is allowed under Australian law.

Nevertheless, the findings have sparked a debate in Australia over the CCP’s influence in the country, and many are reflecting on its impact across several sectors—from media freedom, to national sovereignty, to the rights of Chinese dissidents who are being harassed by the CCP on Australian soil.

Foreign Policy recently reported that the news has “set off a domestic debate about just how wary Australians should be about their largest trading partner. How carefully should Australia manage its ties with China moving forward? And, although American attention remains focused on Russia’s interference in the 2016 presidential election, should the United States have the same debate?”

Of course, while the issues are only now coming into popular discussion, this is not an isolated problem.

The front operations now coming to light in Australia are fashioned from the same threads of influence the CCP holds over many countries, including the United States. And the methods it uses in Australia are generally the same ones it employs in every country.

The front operations now coming to light in Australia are fashioned from the same threads of influence the CCP holds over many countries, including the United States.

The Epoch Times exposed many similar CCP operations in Australia in 2005, when former Chinese diplomat Chen Yonglin defected and exposed the operations of the Chinese Consulate in Sydney. This newspaper has also deeply exposed similar CCP front operations being run in the United States, Canada, Hong Kong, Taiwan, and in many other countries.

Chen said at the time, “It is a pyramid-like structure and system. They manipulate Chinese people in the name of ‘unite overseas Chinese.'” He detailed how the CCP uses Chinese student groups as special agents, how it influences overseas media using advertisements from Chinese companies, and how it pressures foreign politicians.

What’s at play are the operations of the CCP’s overt spy departments, which are mainly run under its United Front Work Department and its Overseas Chinese Affairs Office. These two departments, in turn, run operations through the CCP’s overseas embassies and work to create a “united front” for the CCP by subverting and influencing elements in foreign societies to work on behalf of the Chinese regime’s interests—often unknowingly.