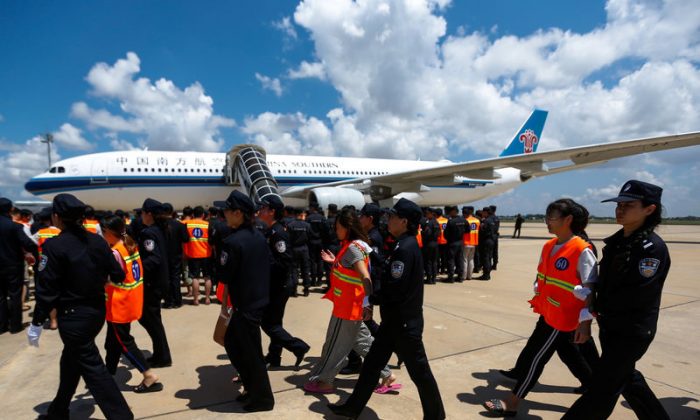 Chinese nationals (in orange vests) who were arrested over a suspected internet scam, are escorted by Chinese police officers before being deported at Phnom Penh International Airport, in Phnom Penh, Cambodia, Oct. 12, 2017. (Reuters/Samrang Pring)
Social Issues

Expat Chinese around the world have become the target of different kinds of telecommunications fraud by Chinese scammers in Cambodia in recent years. Insiders and a number of fugitives who were once controlled by these fraud rings, have recently revealed details as to where these scammers are located and how they operate.

Luo Ding (pseudonym to protect his identity) is one of the fugitives. According to a Feb. 17 report by China’s Southern Weekly, one of Luo’s “fellow countrymen” urged him in late December of last year to take a job as a chef in Cambodia. He told Luo that the basic salary would be 10,000 yuan ($1,580) a month plus a commission if business was good. Luo, who wasn’t doing well financially at the time, liked the terms and accepted the job.

In order to avoid customs inspection, the “fellow countryman” smuggled Luo and four others across two borders. They started in China’s Yunnan Province, crossed into Vietnam, and then traveled across mountain roads to Ho Chi Minh City, and eventually by car to Cambodia.

After arriving in Sihanoukville, the “fellow countryman” took Luo to an internet investment company in the Royal Paradise area where the chef job turned into that of an “internet investment promoter.” That’s when Luo realized that he had been deceived, but at this point felt he had no choice but to do the job.

The so-called internet investment company was actually an internet fraud company, and being a “promoter” meant using different tactics on social media to lure people into gambling on online gaming sites or to make bogus investments.

The fraudsters’ internal term for investment promotion is “pig killing.” It includes creating a persona of a quality single person on social media, targeting singles of the opposite sex online, developing a “relationship” with them, and finally, after the relationship has stabilized, leading them to invest.

In the early stage of the investment phase, the promoter asks target customers to put up a small amount of money, such as 500 yuan or 1,000 yuan ($80 or $160) that is returned in a timely manner, and called “sweetening the deal.” Once the customer’s trust is obtained, and the investment reaches a certain amount, the backend of the network investment company will suddenly be locked, and the promoter is required to cut off contact with the customer, achieving the goal of “killing the pig.”

While being trained to deceive and defraud unsuspecting social media users, the promoters themselves are mistreated by their bosses.

On Luo’s first day at work, he witnessed the supervisor scold more than a dozen new employees, telling them: “You greenhorns, do you understand the rules? Having come here, you have to obey, otherwise you will be handcuffed and electrocuted.”

Once inside the compound, Luo lost all personal freedom, and wasn’t allowed to leave. His phone was checked  periodically.

Every promoter in Luo’s group was given 10 mobile phones and an account for each phone. Those who performed well had 20 phones. To prevent the police from tracking them, the company bought a large quantity of mobile phone cards at low cost and changed phone numbers every few days.

Promoters had to chat online all day. On the internet, men can pretend to be women and women can pose as men, Luo said. He was told to greet 50 people every day and add 5 to 10 new friends.

They worked a minimum of 12 hours a day and were required to send screenshots of their works in progress to a group chat. If their tasks were not fulfilled, they were forced to work overtime. Some promoters could only sleep three to four hours a night.

At first, Luo was assigned to the “European and American group,” which targeted Chinese people living in Europe and America. They also had translation devices in case they encountered English-speaking “customers.”

Because Luo was slow at typing and unfamiliar with computers, he was soon transferred to another job—telephone fraud. On his busiest days, he made about 1,000 phone calls, and he did lead some people to fall for the scam. But the boss was still dissatisfied with Luo’s performance and soon after sold him for about $10,000 to another local scam firm called Old Peak.

All the while, Luo was looking for an opportunity to escape. On Jan. 31, Chinese New Year’s Eve, he saw an opportunity. Luo stayed up until about 5 a.m. After his roommates fell asleep, he bypassed the surveillance cameras and ran down the alleyway behind the investment park, scaled four 5-foot walls topped with barbed wire, and ran across the hillside behind the park. He didn’t stop running until he saw a taxi at the end of the road. Only then did he feel sure he had escaped. It was his “only chance,” Luo said.

Today’s scammers are no longer street-level thugs. They are organized, large-scale, companies with well-equipped facilities and clear hierarchies.

According to Zhao Song, who still works at an internet investment company, these companies have complete structures, including departments for business, administration, customer service, logistics, and so on. The so-called business department is actually the core of the fraud operation. It is usually managed by a team, with a supervisor, group leader, and the promoters. There can be three to five people in a group or eight to ten in a larger group. Supervisors report directly to the boss.

In a Feb. 13 report, Jimu News, a Chinese newspaper based in Hubei Province, quoted people familiar with the matter  saying that most of the industrial parks in Cambodia, locally known as “internet investment parks” are engaged in network fraud—including those in the capital Phnom Penh, Sihanoukville Port, and Bodhisattva City. The owners and operators of these companies are mostly Chinese. The size of the companies ranges from 12 to nearly 200 people.

Driven by the huge profits of online fraud, these enterprises publicly release information to attract more workers, and they also buy staff for $20,000 to $30,000 each.

The temptation to make huge amounts of money makes some middlemen willing to risk smuggling people out of China by cheating, kidnapping, and controlling their personal freedom. It also puts Chinese living in Cambodia at risk of being kidnapped and resold at any time. Victims are often deceived by their so-called fellow countrymen, friends, and even relatives, as well as by false recruitment advertisements. But for most, it’s the lure of high salaries that caused them to be victimized.

Parks, where the fraud companies are based, are heavily guarded around the clock, run by local gun-toting gendarmes and security guards hired by Chinese owners. People have to swipe a card to get in and out of some gates.

Li Kai Xiang (pseudonym), who escaped after being kidnapped in Cambodia, told Southern Weekend, a Chinese weekly, that he lived in a dormitory with black curtains, and the balcony windows and doors were secured by steel bars. The dormitory lights were turned on day and night, but from the outside, one couldn’t tell that people were living inside.

Workers who failed to meet the performance standard or comply with the rules were beaten, electrocuted, and grounded. And women were even threatened with prostitution.

Li Yayuan, another Chinese man who recently escaped, said that 1,500 milliliters of his blood were drawn every six weeks because he didn’t cooperate. The blood was drawn seven times and he was near death by the time he was able to leave.

However, there are reports that those who cooperate with the fraudulent internet investment companies’ schemes do make a lot of money. According to Ah Long, an operator of a WeChat account who follows the plight of Chinese-Cambodians, although people were tricked into going to Cambodia, some voluntarily stay and commit fraud because they have a large monthly income.

The increasing number of kidnapping and fraud cases in Cambodia has attracted the attention of local Chinese who have a sense of justice and a willingness to do something about it.

In November 2020, Chinese-Cambodian entrepreneur Chan Poh Wing first learned of the situation when three Chinese people asked him for help. Chan was so shocked by what he heard that he started a rescue operation. So far, he and his team of volunteers have rescued more than 300 Chinese from Cambodia. Chan also warns young Chinese of the danger and to not be deceived by the promise of riches.