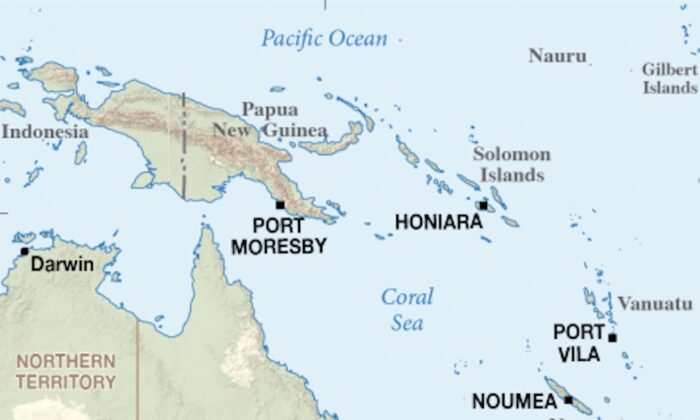 Map of Australia's immediate neighbors in the western Pacific Ocean. (College of Asia and the Pacific/ANU/CartoGIS Services [CC BY-SA 4.0])
Australia

Chinese Foreign Minister Wang Yi landed in the Solomon Islands capital Honiara on May 26 where he will meet with the Pacific nation’s leadership for a two-day visit.

Beijing is expected to sign-off on a contentious security deal with Solomon Islands Prime Minister Manasseh Sogavare that will open the door for Chinese People’s Liberation Army to station troops, weapons, and naval ships in the region.

“Yi and [Foreign Minister Jeremiah] Manele are expected to sign a number of cooperation agreements that will enhance the bilateral relationship between the two countries,” according to a statement from the Solomons official government website.

“Yi and Minister Manele are scheduled to hold a joint press conference at the end of their official engagements today before departing on Friday.”

He will attempt to advance a recently uncovered Pacific-wide security and data communique that could pave the way for Chinese telecommunications firms to embed themselves into the infrastructure of the region—posing a threat to privacy and security.

A draft of the China-Pacific Island Countries Common Development Vision and a five-year action plan—leaked to Reuters—has been circulated to the leaders of 10 Pacific nations and promises a China-Pacific Islands Free Trade Area, police training, and cooperation in the “fields of traditional and non-traditional security,” including a pledge to work on data networks, cyber security, and smart customs systems.

Australian and U.S. representatives have rushed to stem the influence of Beijing in the region, with new Australian Foreign Minister Penny Wong touching down in Fiji to meet with Prime Minister Frank Bainimarama and Henry Puna, the secretary-general of the Pacific Islands Forum.

“Australia will listen to our Pacific partners as we work together to face our shared challenges and achieve our shared goals—including tackling climate change, pandemic recovery, economic development and regional security,” she said in a statement.