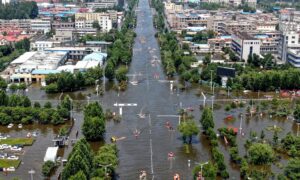 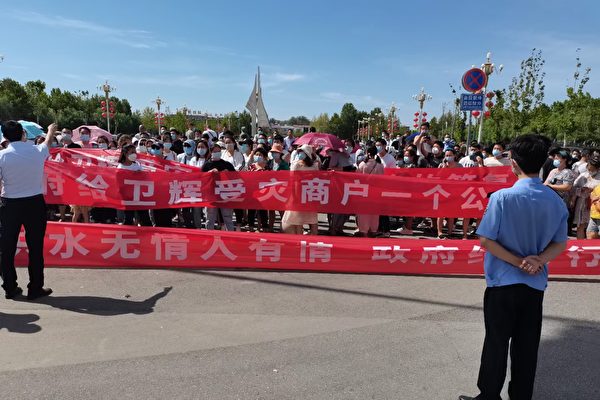 Petitioners of Weihui City, Henan Province, China, hold banners in front of the municipal government asking for aid and compensation on Aug. 25, 2021, after a devastating July flood. (Courtesy of interviewee)
Social Issues

After more than a month since a devastating July flooding in China’s central Henan Province, residents are struggling to get displacement subsidies of a maximum of $162 per person.

Heavy rainfall poured down from July 17 to July 20 in Henan. Floods affected half of Weihui city’s 600,000 residents, and displaced about one-third of the locals, The Epoch Times reported on July 30.

At least 1,000 locals gathered in front of the government office complex on Aug. 25, asking officials to compensate them for their losses and explain why there was a delay in receiving subsidies. But the Chinese Communist Party (CCP) mayor of Weihui told representatives of residents to leave, and she did not offer any timeline for issuing displacement subsidies.

Mr. Lin (an alias) is a resident of Weihui and the owner of two restaurants. He was one of the petitioners in front of the local government on Aug. 25. The Chinese edition of The Epoch Times interviewed him on Sept. 1.

According to Lin, Weihui was not flooded by the heavy rains, but by the floodwaters released from dams by the local government without warning. He also said local officials did not offer help to flood victims.

Lin said that both of his restaurants were flooded, amounting to a total loss of $15,500, but he knows people who suffered far more losses than he did.

For example, the frozen foods wholesaler who he used to buy meats from owned three warehouses and lost over $150,000.

The wholesaler’s employees told Lin that all the frozen meats in the warehouses spoiled and she spent nearly $5,000 to have people dispose of the bad meats.

“She was a very nice lady, and always chatted with us when we went for meats. Now she just sits there and looks rather dazed and delirious,” Lin said sadly.

There was a wholesale Chinese wine shop not far from Lin’s restaurants. “They sell premium wines of the best brands in China. But all his stock in the shop was flushed away by the floods. His loss is between $460,000 and $620,000,” Lin estimated.

“An elderly grandpa, who is over 70 years old, lived near the spinning mill in the old urban district. He came back home only to find nothing left, and he committed suicide,” Lin said.

Despite the huge property losses and spiritual suffering of the local citizens, the local government does not do much to help, Lin said.

“The government promised to provide $23 per day for a maximum of seven days as a displacement subsidy, but many of us have not received a single cent,” Lin said.

Some residents who have received the money are required to return it, either because they do not have hukou—a compulsory household registration system used in China—in Weihui or because their businesses were on the second floor of buildings.

“The local government says the second floor is not flooded, and it does not care about these businesses,” Lin said, “This is a rogue government.”

“You can’t see Li Jin [the mayor] at all. You can’t see any disaster relief supplies at the displacement sites—she did not distribute the food sent from other places. Buns and vegetables are just left to rot in huge quantities. The government is not working for us,” Lin said.

“She finally showed up on Aug. 25, and she only demonstrated her authority,” Lin recalled. “She agreed to lift restrictions on dining in, and then she just told us to leave.”

The next day, when residents went back to the government office complex, they found it was strictly guarded by police.

Lin said Weihui municipal government tricked flood victims into a stadium and then locked them in before Chinese Premier Li Keqiang came for inspection.

“The officials told the petitioners that the government would offer them better living conditions, such as a standard hotel room for each person, three free meals, and $15 per day,” Lin said.

“But they sent petitioners to the stadium, which was wired and locked. There were guards watching them. The petitioners could not get out and had to stay in the empty stadium. Elderly people could not sleep,” Lin said. They were released after the premier left Henan.

The local government has also strictly censored online information. People outside of Weihui know little about what really happened in the city.

“The self-media platforms and Douyin [Chinese version of TikTok] have all been censored. The videos we sent out could reach only within several kilometers. Civil rescue teams from across the country came to Weihui to offer help, and their videos, photos, and posts have been deleted,” Lin said.

The Epoch Times reached out to the interviewee again before the publication of this article, and he said many people have not received the displacement subsidy yet.

Phone calls made by The Epoch Times to reach the local Office of Letters and Visits—which is responsible for petitions—for comments and information were not answered by the time of publishing.