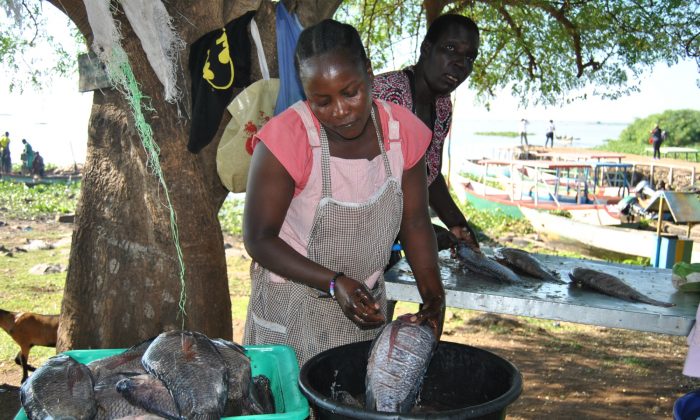 Francisca Odhiambo, a fish monger at Dunga Beach on the shores of Lake Victoria, Kenya, prepares fish for sale on Dec. 7, 2018. (Dominic Kirui/Special to The Epoch Times)
Africa

KISUMU, Kenya—The early morning rays beat onto the Dunga Beach in Kenya’s Kisumu County as the fishermen bring forth their catch and the women fishmongers buy it from them to resell on the beach. Their customers are tourists who come here to enjoy the view and maybe take a boat ride on Lake Victoria, Africa’s largest lake by area and the world’s largest tropical lake.

Francisca Odhiambo, one of the fishmongers, is busy scaling, gutting, and deep-frying her fish, getting them ready to sell. “I have done this for more than 15 years,” she said.

The 42-year-old mother of five says her family depends on the business to survive, but for her and many other fishmongers at the beach, things have changed since Kenya began importing fish from China.

“My husband works as a shopkeeper and we put together what we get from our businesses to pay rent and send our children to school. Many women here are widowed and since the Chinese fish came, most of them cannot even pay rent for their houses,” she explained.

“People cannot differentiate between our fish and the fish that is imported and this has affected our business. We sell tilapia, a delicacy for most people, but since the Chinese fish came people are buying that, thinking they are getting tilapia, because they can’t tell the difference.”

In October, Kenyan President Uhuru Kenyatta heard concerns from traders who told him about the negative impact of the imported Chinese fish during an annual Small and Medium Enterprises Conference at Strathmore University in Nairobi.

Kenyatta acknowledged their concerns and later announced a ban on the fish. “We can say that the fish that has arrived is bad, and we close it out. There are many ways the government can work for us to ensure our people make profits, if we really intend on serving our people,” he said, according to local media.

Two weeks later, China retaliated. During a familiarization tour of the Standard Gauge Railway (SGR) at the Chinese embassy in Nairobi in late October, the acting Chinese ambassador to Kenya Li Xuhang expressed doubts about the fate of Chinese-funded projects in the country, such as the SGR.

China threatened to withhold funds meant for the completion of the second phase of the railway line from Naivasha to Kisumu as part of its One Belt, One Road initiative. The plan includes building a railway line connecting the Port of Mombasa to Malaba, then on to Kigali, Rwanda, and further into Bujumbura, Burundi, with a junction to Juba, South Sudan.

This prompted the Kenyan government to lift the ban on the import of fish from China and quickly repair its relations with Beijing. Susan Imende at the Kenya Fisheries Service issued a statement to this effect in late October, saying the government’s move was intended to foster consultations between the two countries.

In recent years, concerns have mounted over how China is drowning African countries—especially in the Sub-Saharan region—in loans for projects that employ Chinese citizens and exploit natural resources. Countries such as Kenya, Zambia, Sudan, Burkina Faso, Namibia, and Zimbabwe are feeling the effects of China’s presence.

China’s growing influence in these countries could be why the Chinese ambassador reacted so angrily to Kenya’s announcement to ban the import of Chinese fish, terming it a declaration of a trade war.

Godfrey Agong, the treasurer at the Dunga Beach Management Unit in Kisumu, says the fishmongers who buy fish from the fishermen to sell at the market in Kisumu or on the beach are affected the most.

But for the fishermen on the Lake Victoria, things are also looking grim. Fredrick Ochieng, 29, has been in the fishing business for the past 11 years and says the issue of imported Chinese fish has the potential to devastate the fishermen’s livelihood.

“If the fishmongers do not get a market for the fish and tomorrow we want to sell to them, how will they be able to buy?” he said.

As for Odhiambo and many other fish traders across the country, life will certainly change if the import of fish continues. They’ll be forced to either get out of the business or continue making losses.

“All I wish for now is that our government can do something to rescue us and our business since this trade is what we depend on to feed our families and school our children,” she said.

“Government should not simply look at some vested interests and forget about our welfare as citizens.”