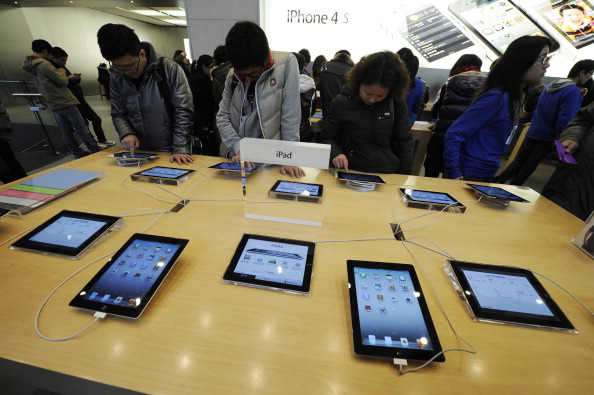 Customers look at Apple iPads at a store in Shanghai on February 22, 2012. (Peter Parks/APF/Getty Images)
China

A local court ruling has temporarily allowed Apple Inc. to continue to sell its iPad tablet computer in Shanghai until the next hearing in late February, after an earlier decision had halted all sales of the iPad in China.

The latest instalment for Apple Inc. in China has been embroiled with litigation about ownership of certain trademarks. The world’s most valuable company and maker of iPad and iPhones is defending its right to use the iPad trademark in Mainland China, against a failed Hong Kong display maker.

Shenzhen Proview Technology is contesting the sale of the iPad, by arguing that the “iPad” trademark name it sold to Apple via Proview’s Taiwan affiliate in 2000 was not legitimate. Proview is represented by lawyer Xie Xianghui.

Carolyn Wu, a Beijing-based Apple spokeswoman said that Proview “refuses to honor their agreement with Apple in China.”

Xie contends that “Apple has no right to sell iPads under that name,” according to an AP report. Apple countered that Proview violated the sales contract by failing to transfer the trademark rights in mainland China.

Whereas an Apple spokesperson through a written statement claimed that “We bought Proview’s worldwide rights to the iPad trademark in 10 different countries several years ago… Proview refuses to honor their agreement with Apple in China and a Hong Kong court has sided with Apple in this matter.”

Although a Hong Kong judge had made a decision in favor of the Cupertino, Calif.-based Apple in July, Proview lawyers contested that the that the Hong Kong ruling was invalid in mainland China.

In Shanghai, there are three Apple-owned stores, and the potential loss of profits for the electronic giant could be severe because the success of the iPad.

The controversy extends beyond the debate of the ownership of the iPad trademark, despite its popularity in China and around the world. Scrutiny of Apple’s manufacturing techniques has been revealed that its contractor—Taiwan’s Foxconn Technology Group—which is the Mainland Chinese hub for all is production, has received criticism about its workers’ rights and ethical practices, with reports of suicides.