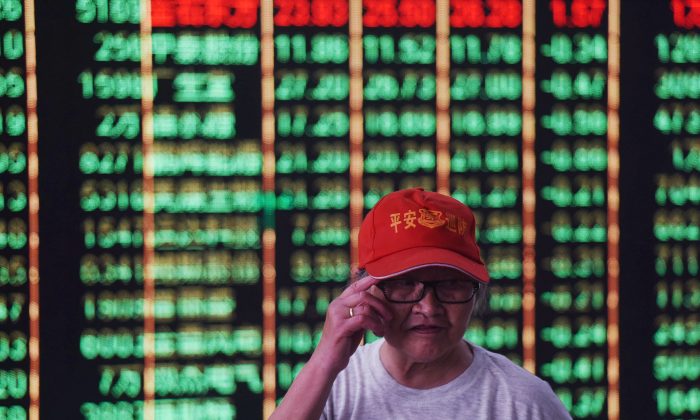 Chinese onshore stocks closed June with one of their worst months in recent memory, hit by a combination of trade tensions with the United States, depreciating yuan currency, and lackluster economic indicators.

The sobering results were recorded even after MSCI added around 230 Chinese shares to its benchmark emerging markets index, which was expected to boost investment inflows.

The yuan currency has also been in a prolonged slump. The yuan (CNY) lost around 3.4 percent of its value against the U.S. dollar during June.

The last time Chinese stocks experienced a large-magnitude crash was in 2015. But so far, the scale of this year’s downturn hasn’t reached those proportions.

Right before the 2015 crash, the Shanghai Composite had a forward price-to-earnings ratio of 19, according to data from Bloomberg, and many companies in the index had multiples far higher. Today, the index is valued around 10.5 times projected earnings, according to Bloomberg, which is a lower rate since the end of 2014.

Signaling the level of concern at the highest level of the Chinese communist regime, the National Institute of Finance and Development, a regime-affiliated think tank, published a report last week warning of “financial panic.”

The report said the Chinese economy may be on the edge of disaster, brought on by a combination of increasing bond defaults, currency depreciation, tightening lending and liquidity, and trade tensions with the United States.

“After the 2015 stock market disaster, the leveraged funds on the Chinese market have not been seriously cleaned up. Instead, there has merely been ‘a change of clothes,’” the report said.

The study is also concerned that the ongoing Sino–U.S. trade tensions will have serious knock-on effects for the Chinese economy and financial markets.

“The combination of old and new factors is likely to lead to a high degree of nervousness in the financial market and a sudden increase in market risk, which in turn induces financial panic,” said the report.

On June 24, the People’s Bank of China (PBoC) cut the reserve requirement ratio, or the amount of cash that banks must hold in reserve. This action freed up around 700 billion yuan ($105 billion) at banks, which can go into new lending and investment ventures.

The PBoC’s cutting of reserves is a new, subtle stimulus measure the central bank hopes can slow the recent market slide. The PBoC’s latest messages had a “more dovish tone in liquidity management” and “emphasized the need to make pre-emptive policy fine-tuning amid rising external risk,” said a research note by Morgan Stanley on June 29.

Regarding the yuan currency, traders do expect Beijing to begin monetary action to defend its slide should the currency eclipse the psychological barrier of 6.70 per dollar, according to a survey of traders and analysts by Bloomberg last week.

The PBoC is expected “to draw a red line in the sand” to stop continued depreciation of the yuan, NatWest Markets EM Asia Strategist Maximillian Lin told CNBC on June 27.

In June, the National Development and Reform Commission announced a notice to guard against risks from foreign-denominated debt, specifically referring to those utilized by Chinese property developers and local governments.

Chinese onshore issuers sold $99 billion worth of offshore debt through the first five months of this year, according to the commission.

Such borrowings have been an important financing vehicle for onshore property developers and local governments. And banning such short-term vehicles could further squeeze the liquidity of already cash-strapped property developers.

Among the concerns of the commission is the recent strength of the U.S. dollar. “Some enterprises have weaker ability to withstand exchange rate fluctuations because they do not have a source of foreign exchange earnings,” the commission said in its notice.