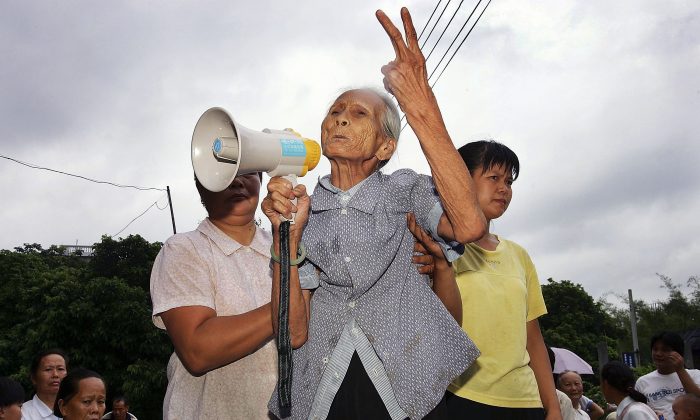 An octogenarian grandmother gets up on a pile of rocks in her bare feet to give a speech against the corruption of the village secretary, at a villagers' meeting of Taishi Village on July 31, 2005 in Guangzhou of Guangdong Province. Ma Qiang argues that such abuses of power are common. (China Photos/Getty Images)
China

Chinese Filmmaker: Life in China is More Brutal Than Any Screenwriter’s Imagination

Ma Qiang is a Chinese independent film and documentary director. This is an abridged translation of his most recent article, originally published in the online journal China Human Rights Biweekly. It argues that murder, abuse, and conspiracy to harm take place constantly in China, and that the authorities simply fail to act. An increasingly dysfunctional society is resulting. — Epoch Times translation team

No screenwriter could come up with a script about the tragic things happening to people in China every day. It’s just too shocking and heartbreaking.

In 2011, I resigned from my boring work unit and was ready to join the film and television industry. A cultural company with international background approached me, asking me to write a movie script that reflects the social issues at the bottom of Chinese society. The agent stressed specifically that the producer and camera crew were all foreign companies, so I could write without hesitation.

As fast as I could, I wrote the outline for the film Grand Petition. The story is based on the personal experiences of several petitioners that I knew. Soon, the agent responded, saying the producer thought the stories were too tragic. No one would believe that such things were happening in the 21st century, especially in China, even if the film was made. They said they could not invest in this movie considering box office revenues.

Shortly thereafter, the famous director Jia Zhangke made the film A Touch of Sin, also about life at the lowest rung of Chinese society. It was based on four actual cases reported by official media and depicted with barely any artistic improvement. It came almost straight from the mouth of CCTV, and it won numerous awards overseas. But the box office was certainly not good. It was banned in China.

The recent news reports, however, are a lot more tragic than Jia Zhangke’s movie. Life at the bottom of Chinese society is indeed a hell!

While I was working on this article, an event was being widely spread on microblog and Wechat and was also being removed by the censors. A middle-school student in Luzhou, Sichuan Province, was brutally beaten to death for not paying a 10,000 yuan “protection fee” to bullies at school who are rumored to have powerful family backgrounds. The student had his arms and feet broken and bruises on his back from being beaten with a steel pipe. After his death, the school authorities and police announced the cause of death as “having fallen from a high place.” They intended to immediately cremate the body before the family got there. The family rushed to the scene just in time to prevent them from loading the body into a vehicle. Weeks later police were still looking for the student’s family and the body.

Less than a week prior, a case that had happened last year in Shandong was exposed. A business woman who was the victim of usury was beaten and sexually assaulted by a group of local debt collectors in the presence of her son. Somebody called the police, but upon arrival, the police merely said to the debt collectors, “It’s alright to collect the debt, but you can’t hit people.” Then they left. The son then fought off the aggressors with a fruit knife, killing one man and injuring three. A court subsequently sentenced the son to life in prison. According to an online report, some of the usury money went to local government officials.

Another incident that was also uncovered in Henan Province at about the same time, was the rape of over 30 young girls under 14 years old that had gone on from 2015 until the present. Renowned local business and government leaders were said to be involved. They allegedly held the belief that sexual relations with virgins could bring them promotions and other blessings.

Also, two weeks ago, Ming Jingguo, a man from Ganzhou, Jiangxi Province, killed the vice township leader with a hoe for leading a forced home demolition team. Apparently, the local government wanted to build a new village and decided to demolish private homes that did not look good, without paying any compensation.

In less than half a month, several cases of vicious crimes perpetrated against people at the bottom of society came to light. The cases did not even include interceptions and detentions of petitioners or persecution of human rights lawyers; people are used to that.

We can’t even remember most things that happened half a month ago because we all suffer from amnesia. Human tragedies are the norm in China and are responded to with shameless laughter. These things occur in this country every day, with tens of thousands of spectators watching and forgetting again and again.

If we can’t stop these crimes from happening, some day they may happen to us. If mankind can’t do something about it, crime will eventually devour the world, and everyone will become victims.