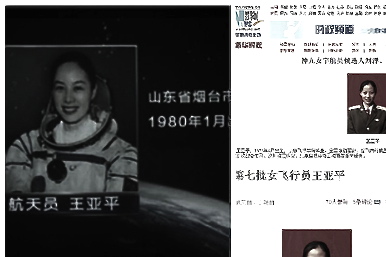 Many Chinese newspapers also reported in March that Wang Yaping was born in April 1978, the same year as Liu Yang, the first female astronaut, was born. (Screenshot via NTD Television)
China

While Chinese state propaganda has been playing up the Shenzhou 10 space mission, inconsistencies about the age of one of the astronauts have led to discussions, including sarcastic comments, among China’s outspoken social media users.

State-run media described Wang Yaping, one of the three astronauts, as a “beautiful woman,” and the “first space traveler born in the 1980s.”

Wang and her two male colleagues, Nie Haisheng and Zhang Xiaoguang, will be spending one week in the orbiting Tiangong space station.

Wang will be broadcasting a physics lecture to students on earth from inside the space station to foster young Chinese people’s interest in the space program. She is the second Chinese female astronaut after Liu Yang who was a crew member on the Shenzhou 9 in June 2012.

According to a brief biography by state mouthpiece Xinhua, Wang was born in January 1980 in the city of Yantai, east China’s Shandong Province. She is a major and was selected for the Shenzhou 10 mission in April of this year.

Earlier in April, Xinhua reported that Wang was born in April 1978. But recently, the majority of articles that said Wang’s birthdate was in the 1970s have been deleted.

Many Chinese newspapers also reported in March that Wang was born in April 1978, the same year as Liu Yang, the first female astronaut, was born.

The inconsistency of the birth date by state media propaganda has sparked comments among Chinese netizens.

Netizen “SANYIE5” wrote on his Weibo: “Such a serious thing is inconsistent. How could the political examination be so sloppy?”

“18 peanuts” wrote: “It’s not only the need of the Party, Wang also called herself a person of the 80s in an interview. Who told a lie?”

Tao Fei said: “There have been too many such lies, and I already had the thought that history is a deception.”

Jchung wrote: “Evidently, before June 3, she was born in April 1978. But a few days later her age has been changed, passing through time and space, to January 1980. Thus, China has not only developed aerospace science and technology, but the techniques of a time machine.”

“Jia Continent Cloud Sea Born-again 1” wrote, “What her real age is depends on the needs of the state.”

The controversy over Wang’s age recalls another instance where the state was accused of falsifying the record. During the 2008 Beijing Olympics the ages of several female gymnasts came into question.

Translation by John Wang. Research by Aifang He. Written in English by Gisela Sommer.