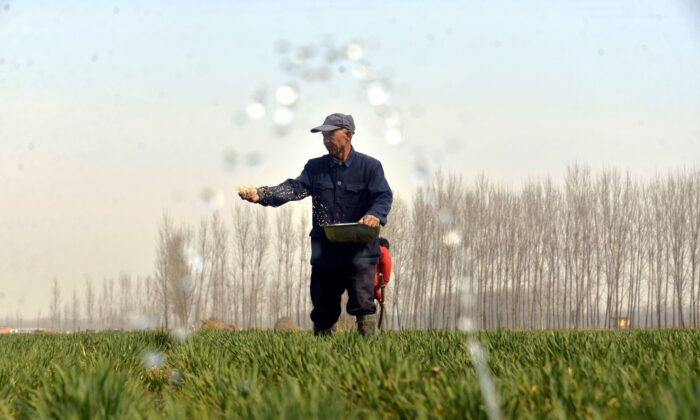 The COVID-19 pandemic continues to spread in China’s northeastern province of Jilin. Changchun City, the provincial capital, has been under lockdown since March 11. Farmers who went there to do temporary work in the winter are stuck in the city and cannot return home for spring plowing and planting.

The Changchun City Pandemic Prevention Department issued an emergency notice on April 5 allowing farmers stranded in Changchun to return to their hometowns to get their crops planted, but a series of application procedures must be submitted to meet the various requirements. Among them, the farmers must be picked up by vehicles organized by their hometown authorities and stay at home for at least 7 days after arrival.

A villager surnamed Liu from Sijia township of Lianhuashan, who temporarily worked in Changchun, told The Epoch Times that she called the Lianhuashan Management Committee to get the papers needed to return home for spring chores. Her 70-year-old father is at home, but he was injured in a traffic accident last year and cannot work. She urgently needs to go home for spring plowing.

However, Liu said the local government wouldn’t issue the required paper work to allow them to return, “They said there is no serious COVID-19 outbreak in our Sijia township in Lianhuashan. They were afraid that we would bring the virus home, they would not let us go back.”

Liu said: “The government here in Changchun said that they can issue all the needed paperwork from their end for me to leave the city, but my hometown has not given written approval for me to return, so I still can’t go back home. Instead, I’m stuck on the road now. I can’t go back to Changchun since I already left, and I’m not allowed to return to my hometown.”

Liu said that her family has two corn fields, which provide food for the family for the whole year. She has been working odd jobs in the city since November last year to supply her family an income, but it’s very been difficult to find work due to the pandemic and lockdowns.

She said that the spring plowing in the northeast has now entered the middle stage, and farmers will have to  start  plowing the fields by April 23 or 24. But now, “the dry stalks are still in the ground, haven’t been cleared, and you can’t sow seeds until the field is cleared and prepared.”

Liu said that her family is not the only one whose spring plowing has been delayed due to the lockdown and the strict pandemic control measures, “In the entire area under the control of Lianhuashan Township, there are at least hundreds of farmers who can’t go back home for spring plowing now. The government hasn’t resolved this for us and has been dragging it on until the time for planting passes, then it will be useless for us to go back.”

Liu said that she has called various government offices for help many times, “I have called the provincial governor’s hotline and the mayor’s hotline, and they have just kept us waiting.”

The Epoch Times called the Sijia township governments of Lianhuashan to inquire about the conditions for farmers to return to their hometowns for spring planting. A male staff member who answered the phone said, “I don’t know how long the process will take. They can only come back with a return permit issued by the upper level government’s Management Committee, and we can’t rush the committee.”

He added, “Even if they come back, they have to isolate at home for 14 days, including 7 days of observation during which they can’t go out of the house. It is a requirement.”

Liu is unable to return to her hometown for spring farming, and because she can’t go back to Changchun City, she is still stuck on the road.

Zhao Fenghua and Hong Ning contributed to the report.