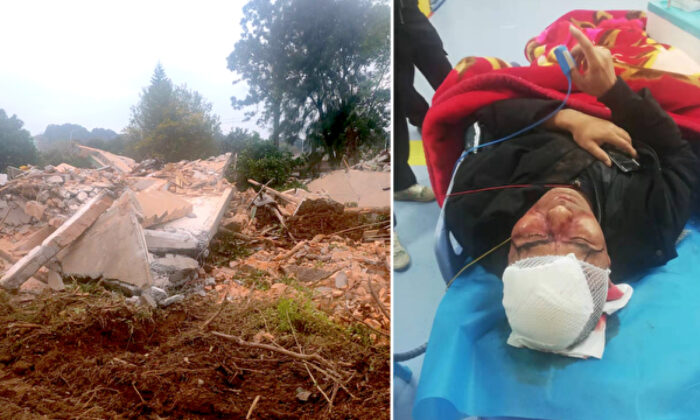 Chinese resident Yan Xinsheng found himself amid the rubble that was once his family home for generations upon the arrival of 2022.

At least two hundred enforcers broke into or surrounded his family home in Xiayang village, Fujian Province, at 11 p.m. on Dec. 30—the night prior to New Year’s Eve—before forcibly tearing down the three-story house to make way for high-rising buildings.

The local government had sold the land to a developer earlier last year yet refused to sign a demolition or resettlement agreement with Yan, he told the Chinese language edition of The Epoch Times. The market value of both the 4,090-square-foot property and the land it sits on exceeds 15 million yuan ($2.3 million).

His elderly brother, the only one at home on the night of Dec. 30, retreated to the rooftop in a bid to resist the demolition. Enforcers drenched him to the skin with a high-pressure water gun from a fire truck when the outdoor temperature was 6 degrees C (42.8° F), according to Yan.

The water spray is normally used to reduce the dust on the site during the destruction.

The man was later beaten close to death with bricks and batons and sent to the hospital semi-unconsciously with blood all over his body. His head was stitched up with more than a dozen stitches in the Second People’s Hospital in Fuzhou city.

Excavators leveled the house to the ground over the night, leaving the family completely homeless.

Yan heard the news at 8 a.m. the next morning and rushed back, finding the shelter for two generations in ruin, with daily necessaries and dozens of longan trees and osmanthus trees buried. All their life savings and hard-earned property accumulated over the past 30 years went missing, he said.

It was the second attempt in the same month to demolish the home.

In the early morning of Dec. 14, another demolition attempt by officials failed as Yan ran to the third floor and resisted to the death with a machete in his hand.

“I’m worried that if they don’t succeed this time, they’ll come back next time and the tactics will be even worse,” Yan said in a previous interview.

“The negotiations are deceitful, ” Yan said, adding leaders of the town previously assured violent demolition would not occur anymore. “I don’t trust this government, it doesn’t keep its word.”

The family was the last household in the area that refused to move out—known as a “nail household” in China—after suffering from another forced demolition and relocation six years ago.

“We fought because that’s all that was left,” said Yan.

“Nail household” is a term used to describe owners who refuse to give up their long-standing properties.

Chinese authorities seek to build a fast-developing modern China over the past decades by erasing ancient neighborhoods of centuries-old grey brick homes and alleyways. Yet demolition compensations are not up to standards, leading many to desperately hang on to their homes, according to victims.

Yan said the local government took down in January 2016 a shipyard which his parents opened in 1983, and another house of the family’s, without compensating or resettling victims during the past five years.

“There is nowhere to plead. … Very many people go outside to rent houses; some appealed for their rights; some also filed a lawsuit or petition. All attempts failed,” said Yan.

He began defending his rights since then, calling for democratic reforms within the ruling Communist Party. Therefore, the rights activist was imprisoned three times and sentenced twice, spending a total of more than three and a half years in detention.

The recent move stripped the last property of the whole family, he said.

The Epoch Times contacted secretary Liu Nanyong of Xiayang village and the demolition office on Dec. 31 but received no response.

Xiong Bin contributed to the report.