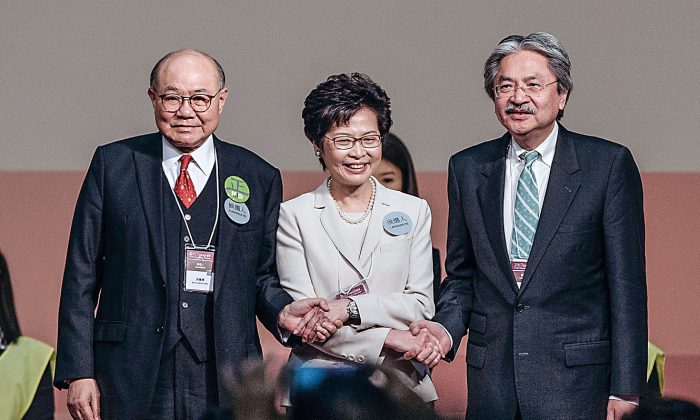 Hong Kong's future, under new chief official Carrie Lam, will be determined by the outcome of political strife in the Chinese regime
By Larry Ong and Li Lingpu
biggersmaller
Print

HONG KONG—The Chinese communist regime pledged not to meddle in the administration of Hong Kong following the former British colony’s return to China in 1997. Beijing, however, has always seen to it that its anointed candidate be installed as Hong Kong leader.

At a glance, the 2017 Hong Kong chief executive election on March 26 stuck to the script. Carrie Lam, the only candidate out of three to receive something akin to open backing by senior Chinese officials overseeing Hong Kong, became the city’s fourth chief executive by winning 777 out of 1,183 eligible votes.

Yet the outcome of the election was foggier than the result suggests.

Two rival Chinese political camps, one headed by retired Chinese leader Jiang Zemin and the other by the country’s current head, Xi Jinping, had sought to align Hong Kong electors to their respective interests in the lead-up to election day. Jiang’s political faction wanted Lam in office, while the Xi leadership wanted to respect the “one country, two systems” policy of noninterference by Beijing and not pick any candidate, this newspaper learned from insiders.

The current political process for selecting Hong Kong’s leader affords Beijing plenty of avenues to sway the elections according to their liking.

The chief executive is chosen by a small election committee—1,194 members this round—comprising business and political figures agreeable to the mainland authorities. Beijing then approves the elected candidate.

Before every election, Beijing makes a concerted effort to signal its preferred candidate to electors: regular telephone calls, closed-door meetings by Chinese officials from the Liaison Office or the Hong Kong and Macau Affairs Office, and articles in Beijing-controlled media outlets in Hong Kong.

Beijing was backing only Lam, said all three officials. The other two candidates, former financial secretary John Tsang and retired high court judge Woo Kwok-hing, were not under consideration.

Xi Jinping, however, appeared to be opposed to the Jiang faction’s kingmaking.

Sing Pao Daily, a pro-Beijing newspaper in Hong Kong that carries the line from Xi, issued articles criticizing the Jiang faction’s efforts to sway the Hong Kong elections, and stressed that Xi had always meant for the electors to pick whomever they wished without guidance from Beijing.

About a week before election day, Epoch Times learned from sources close to the Xi leadership that Xi had sent several trusted envoys to clarify four points to electors: There’s no preferred candidate; Hong Kong must remain stable; electors should vote as they wish without fearing reprisals; and Zhang Xiaoming and Tung Chee-hwa don’t speak for the central government.

“Whoever is picked shall be appointed,” said a Chinese official in Xi’s camp who wished to be identified as Mr. Chen.

Mr. Chen also dismissed claims by Ta Kung Pao that the popular John Tsang did not have the trust of the Xi leadership. “John Tsang has been allowed to handle Hong Kong’s finances, an important portfolio, for nine years,” he said. “The central government has extraordinary confidence in Tsang.”

The Hong Kong elections “starkly contrasts the differences between the political factions in the Chinese regime,” said Zang Shan, a veteran Hong Kong journalist, in a telephone interview. “The factional struggle is very fierce and severe.”

Since taking office in 2012, Xi Jinping has sought to eliminate Jiang Zemin’s faction through a grinding anti-corruption campaign. The Jiang faction has retaliated by undermining Xi, a process most keenly observed in Hong Kong, where the Jiang faction is particularly influential.

Xi has since moved to accelerate the clean-out of officials loyal to Jiang from Hong Kong. Anti-corruption investigators criticized the Hong Kong and Macau Affairs Office, following a round of inspections. Last December, two envoys of Xi’s visited Leung in Hong Kong and told him to “call it a day,” Epoch Times learned.

Zang Shan, veteran Hong Kong journalist and observer of the China–Hong Kong relationship, says that Xi probably wanted Leung out of office in order to allow a more moderate person to replace him and to help heal and stabilize the city.

At a news conference after the results were announced, Carrie Lam said that her “priority will be to heal the divide and to ease the frustrations and to unite our society to move forward.”

“Ultimately, it doesn’t matter which candidate won this chief executive election,” Zang said. Carrie Lam, John Tsang, and Woo Kwok-hing are all establishment elite without deep political ties with the Chinese Communist Party, and all have shown that they “perform their tasks diligently and adhere to rules and regulations.”

“And Xi Jinping appears to be willing to leave Hong Kong to the devices of Hongkongers,” he added.