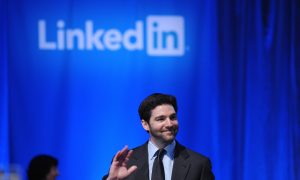 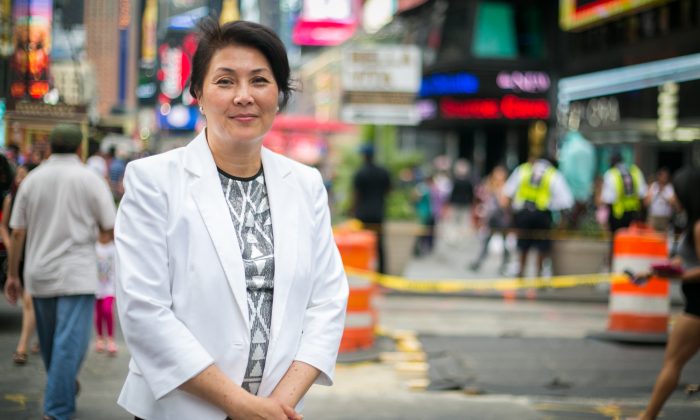 Judy Chen, who has been harassed in Flushing, Queens, because she practices Falun Gong, a spiritual practice based on principles of truthfulness, compassion, and tolerance, poses on Times Square, Manhattan, New York, on June 25, 2014. (Benjamin Chasteen/Epoch Times)
China

NEW YORK—In New York’s Chinese communities people are wary of each other, afraid of honestly voicing their opinions. They know that what they say and do is being watched by individuals loyal to Beijing, and there are consequences for stepping out of line.

“They said they can make me disappear,” said Judy Chen, 55, recalling an encounter in New York with what she believes were Chinese agents.

Chen moved to the United States from Taiwan in 1981. Although she’s not from mainland China, she said that living in New York’s Chinese community in Flushing, Queens, puts her under the watchful eye of the Chinese regime.

“It’s very common knowledge,” Chen said. “If you speak about the Chinese Communist Party, even among co-workers, they’ll tell you to watch what you say.”

She added, casually, that Chinese residents in New York will sometimes report people to the Chinese Embassy if they make comments critical of the Chinese regime.

In return, according to what the people of Flushing said, people get benefits. Business owners may get price cuts on shipments from China. Others may get more opportunities from Chinese business associations in New York whose allegiances are with the Chinese regime.

For the rest, reporting on their neighbors may just give them peace of mind that their families in China are safe.

People like Chen are on the other end of the system. She practices Falun Gong, an ancient Chinese spiritual discipline in the Buddhist tradition based on the principles of truthfulness, compassion, and tolerance. The Chinese Communist Party began persecuting Falun Gong in 1999.

Talking about her beliefs or China’s human rights abuses often comes with a cost, and someone from the mainland who is identified as practicing Falun Gong may pay a steep price.

A woman in her 70s who practiced Falun Gong used to live in the apartment above Chen in Flushing. Last year, she traveled back to China and was arrested.

“We don’t know who reported her,” Chen said. “She was quiet. The only thing she did was hand out fliers a couple times on Main Street.”

Even if someone doesn’t practice Falun Gong, having the wrong opinions can cause problems.

For instance, someone who wants to travel to mainland China may face difficulty getting a visa.

“If you don’t listen, they don’t give you a visa,” Chen said. “You can go back, but they’ll ask for more money or give you a hard time.”

Chen, along with many other Chinese expats, find themselves in a catch-22. They can’t stay in a Chinese community without being tracked and potentially harassed by the Chinese regime. Since many of them don’t speak English, or speak it well—and therefore have trouble finding work—they also can’t leave.

A System for Control

The Chinese regime has a well-organized system for controlling Chinese communities around the world.

A 2009 congressional report warned that there is an “intensive effort put forward by the Chinese government to monitor, harass, and disrupt the activities of Chinese dissident groups operating abroad.”

“Chinese operatives and consular officials,” it adds, “are actively engaged in the surveillance and harassment of Chinese dissident groups on U.S. soil.”

According to Tang Baiqiao, founder of Democracy Academy of China, “all the Chinese people know it.”

Being an active and outspoken Chinese dissident, Tang who lives in New York, regularly faces pressure from the Chinese regime. Yet, he and many others believe that standing up for their opinions and beliefs outweighs the consequences.

Tang said on the local level, the Chinese regime often uses its influence over Chinese community organizations and student groups to carry out its work.

The Chinese regime has two high-level offices that oversee this system. The United Front Work Department manages the regime’s network of controlled “tongs,” or community associations, and tries to recruit new ones into the fold. Some of these associations have connections to organized crime and others are legitimate community or professional organizations.

The system works in tiers. The high-level offices communicate with Chinese embassies and consulates around the world, which then communicate with tongs and student groups. The system is highly effective since the tongs function as pseudo-governing powers in Chinatowns across the United States, and are deeply integrated into the communities.

According to Tang, all provinces in China maintain similar databases. The information is gathered from tongs around the world that affiliate with each of China’s provinces—for example the Shandong associations and the Fukien associations.

“A lot of times the [OCAO] will aid these kinds of organizations and help them set up,” Tang said.

Once the systems are in place, the Chinese regime can give orders that are carried out in Chinese communities around the world.

A 2005 report from the OCAO details such orders. It states overseas Chinese people should “expand the struggle” against Taiwanese independence activists, Falun Gong practitioners, Tibetans, Uyghurs, “and other enemy forces in order to contribute to the defense of state security.”

The report reinforces the warnings from the U.S. congressional report, which states the main targets of the system are Falun Gong practitioners, Tibetans, Uyghurs, Taiwan independence activists, and democracy activists.

The report cites a leaked document from the Chinese Communist Party that “described the ‘Consulate’s main counter-strategy in the battle against such groups.”

It states “a central point of emphasis is ‘mobilizing the force of the [local] Chinese community’ to act on behalf of PRC [People’s Republic of China] interests.”

In Flushing, anyone taking a quick stroll down Main Street will likely encounter people handing out fliers or operating booths to distribute the Chinese regime’s propaganda. They are an ever-present reminder of the CCP’s presence in the neighborhood.

That presence became violent in May and June 2008 when several members of Chinese tongs were arrested for attacking local residents who practice Falun Gong.

For instance, Victor Yau, (aka Qiu Wei), the founder and CEO of the Overseas Chinese Ethnic Foundation, Yau was arrested on June 21, 2008, for allegedly beating a Falun Gong practitioner with a steering wheel lock.

Peng Keyu, the Chinese consulate general in New York, was recorded in a phone interview at the time admitting his involvement in encouraging the Chinese associations to take part.

Chen, herself, was once punched in the temple by a member of one of the organizations that harasses Falun Gong practitioners on the streets of Flushing.

While the physical attacks have mostly stopped in Flushing, less visible forms of intimidation have continued.

The people who harass Falun Gong practitioners in Flushing often snap photos of them.

“When you arrive and walk on the street, the first thing people took pictures of us,” Judy Chen said. “They scare you first, by taking your picture, even if you’re just walking by on the street.”

“One of my roommates had her picture taken,” Chen said. “Her family got really, really upset because the police started harassing them in China.”