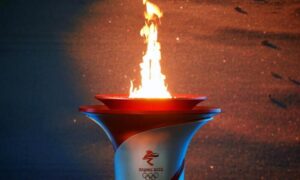 Korean police stop NTDTV from taping during Hu’s visit. NTDTV had official approval to cover Hu Jintao’s visit to Korea during the Busan APEC session in November 2005, but it was prevented by pressure from the Chinese Embassy. (NTDTV)
International

Hong Mei
View profile
Follow
biggersmaller
Print
On the eve of the Chinese Communist regime leader Hu Jintao’s visit to Korea on August 25, the Korean Ministry of Foreign Affairs and Trade (MOFAT) was pressured by the Chinese embassy to revoke the New Tang Dynasty Television (NTDTV)’s approval to cover the news.

NTDTV Korea is a member of the Seoul International Media Reporters Club (IMRC). On August 20, NTDTV applied for the permit to cover Hu Jintao’s visit at the airport, but was notified by the IMRC on the same day that the permit was cancelled. In the afternoon of August 21, NTDTV learned that the Chinese Embassy sent a letter to MOFAT demanding the cancellation of NTDTV’s permit.

MOFAT passed the demand to the IMRC, but after NTDTV’s protest, IMRC made an amendment and submitted the final approved list including NTDTV to the Korea Ministry of Culture and Tourism (MOCT.).

However,  MOCT indicated that the adjudication of this matter was depended on MOFAT and the Chinese Embassy. In the mean time, the IMRC requested MOFAT to provide official document indicating the reason for revoking NTDTV’s permit. MOFAT acknowledged the request, but had not replied to date.

In MOFAT’s routine press conference on August 21, IMRC reporters requested a confirmation from the speaker of the Ministry of Foreign Affairs but did not receive any response.

NTDTV is a U.S. headquartered  international Chinese media that provides independent coverage of news to China. NTDTV is known for disclosing the Chinese Communist Party’s human rights suppression such as Tibet’s bloody events, the persecution of Falun Gong, etc. Therefore, NTDTV is one of the CCP’s primary targets to suppress overseas.

In fact, this was not the first time the CCP has attacked NTDTV in Korea. NTDTV had obtained a permit to cover Hu Jintao’s trip to Korea during APEC in November 2005 in Busan, but it was cancelled due to the pressure from the Chinese Embassy.

In February, 2006, when the NTDTV’s Global Chinese New Year Gala was looking for performing sites, the Chinese embassy in Korea also exerted pressure on many theatres not to sign a contract with NTDTV.

Read this article in Chinese .