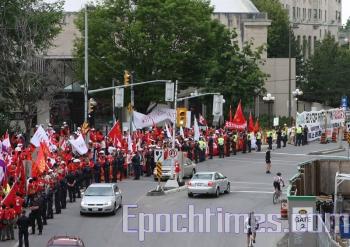 Chinese students wait to welcome Hu Jintao in Ottawa during his visit to Canada's capital in June 2010. (Donna He/The Epoch Times)
US

By Matthew Robertson
Print
WASHINGTON—As Hu Jintao and his entourage go over the final steps for the General Secretary’s tightly scripted visit on Tuesday, Chinese Student and Scholar Associations (CSSAs) and other front groups of the Chinese Communist Party in the DC area are being mobilized to give him a big welcome.

The welcoming groups are a crucial part of a publicity war courtesy of the Chinese Embassy. Hundreds and possibly thousands of Chinese students will set up shop outside the Blair House and the White House. On site they will wave Chinese and American flags, hold up banners, chant patriotic slogans, and sing patriotic songs. If Hu Jintao’s motorcade passes by, they will cheer.

They will work in shifts, be shuttled to and from the site, and be provided with meals and beverages. Some student participants will receive cash payments of up to $80 for the trouble.

The message is getting out to students mostly through emails and bulletin boards at universities in the greater DC area and beyond. In the messages the CSSAs offer to foot the bill, but the money doesn’t come from the students.

The Epoch Times verified, through telephone calls to the George Mason University (GMU) CSSA and the Virginia Tech CSSA, that the Chinese Embassy in DC was behind the arrangements to welcome Hu.

A reporter posing as a student called an officer with the GMU CSSA and asked how he could participate in the activities to welcome Hu. In the course of a 10-minute-long discussion, the GMU student provided a picture of how the activities were centrally coordinated by the Chinese Embassy.

The Chinese Embassy in Washington is in “tight control” of the entire process, the GMU student told the reporter.

First the embassy in Washington notified all CSSAs in the DC area that they needed to mobilize for the welcoming. They were told when and where to arrive, and then sent out emails to encourage members to participate. Some referred to a cash payment, and often included a link to a Google spreadsheet for signing up.

Upon arrival at the welcoming site, staff from the Chinese Embassy will count the number of students, verify their identities, and apportion money to CSSA leaders based on the headcount.

Another phone call by a different reporter was made to an officer with the Virginia Tech CSSA, who corroborated many of the details. “This is what the Embassy set,” he said about why it was a $50 payment and not some other amount. And the money would not be available right away, because “it takes some time for the embassy to issue money.”

The fact of the Embassy’s role in organizing the welcoming groups is further confirmed by a notice sent out by the Virginia Tech CSSA, which was then posted by the CSSA on a Chinese-language electronic bulletin board: “To express a warm welcome for Chairman Hu’s U.S. visit, the Education Section of the Chinese Embassy in the United States specially organizes Chinese university students to go to DC to participate in the welcome ceremony.”

While the University of Maryland CSSA advertised a $55 payment, other CSSAs propose cash payments of between $20 and $80, while some say nothing about compensation. All provide free buses, food, and ample red banners.

‘Do Not Talk About It’

Chinese officials do not want the welcoming ceremonies for Hu Jintao to appear like top-down directives, according to Boxun, a Chinese website based outside China. An official from the education division from the Chinese Consulate in Chicago told students at a recent meeting, according to Boxun: “If you run into journalists trying to interview you, just say you came spontaneously to do the welcome, and paid for all your own costs.”

The information from Boxun is corroborated by, among other sources, a tape recording of a meeting with students held June of last year in the Chinese Embassy in Ottawa, Canada. At that meeting , Liu Shaohua, the first secretary of the education section told the students, “You do not talk about it outside, do not talk about it to anyone, except to people in this circle.”

The only way for The Epoch Times to get honest information from CSSA members was for its reporters to pretend to be part of “this circle.” In order to protect the students who unwittingly provided information, their names are being withheld.

In addition to CSSAs, other local organizations have been required to take part. Over a dozen Chinese groups, some of them with public ties to the CCP, have been called on to mobilize in emails obtained by The Epoch Times.

One of the messages, sent on Jan. 6 to several CSSAs and various Chinese community organizations, is titled “Meeting Minutes on Welcoming Chairman Hu to the U.S.” The minutes indicate that at least one embassy staffer took part in the meeting. The message sets down specific quotas and instructions.

The message states that coordination teams should be formed to organize a joint welcome ceremony; two welcome crowds should be formed, one for the morning, one for the afternoon, with crowds of 300 and 500 respectively; a welcoming ceremony will be held outside where Chairman Hu is staying, with shuttle buses provided for participants; six handheld mikes will be provided, two professional amplifiers, numerous welcome banners, American and Chinese flags, bottled water, and a first-aid kit.

Separate notices to other groups asked the group presidents to “pass the message [the meeting minutes from Jan. 6] around, participate actively, encourage more people to attend, quickly submit names, be alert to further notices.”

Mr. Chen Yonglin was the first secretary of China's Sydney Consulate, until he defected in 2005.

In an interview in 2007 with The Epoch Times, Mr. Chen said, “The control of the overseas Chinese community has been a consistent strategy of the Chinese Communist Party and is the result of painstaking planning and management for dozens of years. It’s not just in Australia. It is done this way in other countries like the U.S. and Canada, too.”

Often CSSA bylaws will state that they are under the “leadership” of the local embassies or consulates; or the embassy will be listed as the “sponsoring organization”; or there is staff overlap.

Chinese consular officials also provide budgets for CSSA chapters. Former CSSA officers have told the Epoch Times of being given regular gifts by consular officials or “activity money,” which can be turned off if the “activities” do not follow consular directives.

CSSA officers are also eager to please because of the omnipresent role of “guanxi” (connections) in China. Frequently students serving as officers in CSSAs are promised plum jobs upon returning to China, having served the Party and the motherland well abroad.

Keeping Protesters Out of Sight

The Chinese students who welcome Hu may do so out of genuine feelings of patriotism and are probably glad to have the chance to pick up an extra $55. But their attendance occurs within a relationship of coercion—they know that the Embassy is behind the event, and the Embassy has great power over their lives in the United States and China.

Whatever the students’ motivations, they are pawns in a battle the Chinese regime is waging to influence Western society.

In the recording made of the meeting at the Ottawa Embassy, Mr. Liu told a crowd of students on Chinese state-scholarships that they must attend the welcome events for Hu Jintao.

“This is a battle that relates to defending the reputation of our motherland. The embassy and authorities inside China have a very high requirement,” he said.

Mr. Liu said the embassy would cover all expenses, which amounted to hundreds of thousands of dollars, based on his comments. But Mr. Liu describes it as “little money,” in light of the “political struggle” the Chinese regime is waging, the goal being to overshadow human-rights advocates who plan to protest during Hu’s visit.