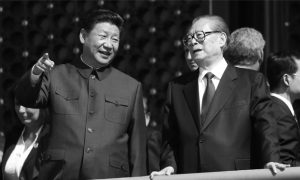 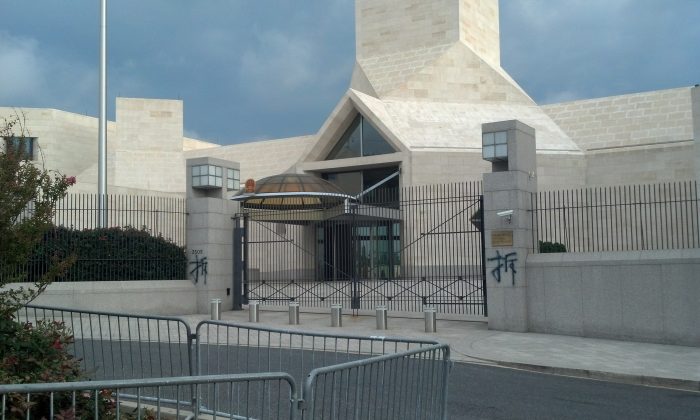 Early in the morning on July 10, the Chinese word for “demolish” was found to have been written three times in spray paint on the walls of the Chinese Embassy in Washington D.C., representing a new step in what is presumed to be mainland Chinese activism against the Chinese Communist Party.

The character written on the embassy walls was 拆 (pronounced “chai”) meaning “to take apart,” and appeared to be both a mockery of what Chinese communist officials write on buildings and houses slated for demolition in China, and a statement against the Chinese regime itself. The word in Chinese when painted on buildings acts as a verb, meaning “demolish this,” or “to be demolished.”

In the past decade, the Chinese character can be seen scribbled on buildings on many streets in major Chinese cities to mark areas that local regime officials are planning to sell to real estate developers. The character has become associated with forced evictions and official profiteers.

It is unclear who graffitied the Chinese embassy but the incident coincides with the start of the fifth annual Strategic and Economic Dialogue, a two-day conference between Chinese and U.S. officials.

Some Chinese news articles have suggested that the slogan may be connected to the Sparrow Initiative, launched by a pro-democracy China group to advocate for land-rights protection. Yang Jianli, a well-known Chinese activist in the United States, became aware of it and circulated the news widely.

Chinese netizens on Sina Weibo, China’s Twitter-like platform, reacted to the vandalism with a note of approval.

A netizen in Fujian Province said, “The Chinese regime is so powerful that it’s going to demolish houses in the U.S. too.”

A Guangdong Province netizen wrote, “It should have been written in red paint with a circle around it, like how it’s done by officials.”

A blogger and scholar well-known in China, Xu Xin, commented on Weibo that the Chinese character signified regime oppression, “It’s widely found in China and has become a symbol of the lack of respect the regime has for people, to just destroy buildings without asking.”