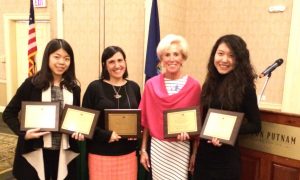 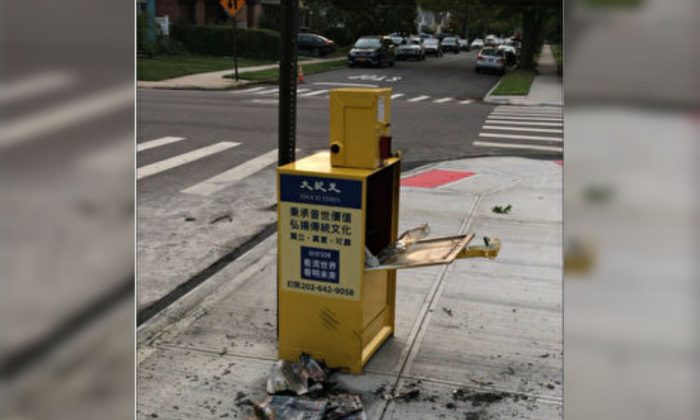 A newspaper box belonging to the Chinese language-edition of The Epoch Times in White Stone, New York City, U.S. was found to have been set alight on Aug. 19. (The Epoch Times)
US News

NEW YORK—Newspaper vending boxes belonging to the Chinese-language edition of The Epoch Times were recently found to have been sabotaged in Queens, New York.

One of the newspaper boxes was found to have been set on fire on Aug. 19.

In New York City neighborhoods with a large Chinese immigrant population, such as Flushing and Chinatown, newspaper boxes dispensing copies of the Chinese-language newspaper can be found on most street corners and along major thoroughfares.

The Chinese-language edition is the largest-circulating newspaper among overseas Chinese communities, and is known for uncensored reporting on news about China, free of the Chinese communist regime’s propaganda.

On Aug. 5, the newspaper switched from free distribution to being sold for 50 cents each.

Several newspaper boxes in the Chinese neighborhood of Flushing have also recently been sabotaged, with the coin slots jammed, preventing people from paying for and retrieving newspapers.

On the morning of Aug. 19, a distribution worker for the paper, Tian Yunhai, found that newspapers inside a box on the corner of 166th Street and 21st Avenue in the Whitestone neighborhood in Queens, had been burned, with some reduced to ashes. The opening to the box, which is usually locked, had been pried open.

A reporter for the Chinese-language Epoch Times found used matches on the ground underneath the box.

Meanwhile, another distribution worker, Wei Lisheng, said that after the publication switched to being a paid newspaper, he started discovering newspaper boxes in Flushing with their coin slots jammed, usually by a piece of plastic.

On Aug. 19, he found seven boxes on Flushing’s Main Street—a high-traffic area where many customers would purchase copies—had been damaged in the same way.

“It’s clear that someone deliberately did this,” Wei said.

The incidents were reported to New York City police.

This isn’t the first time the publication’s distribution channels have faced interference, as similar incidents have been reported in Canada and several U.S. cities. In May, a New York man was arrested and charged with threatening a Chinese woman after she tried to stop him from throwing away papers that he took from a box in Flushing.

For years, there have been many instances of individuals—likely agents of the Chinese regime—sabotaging the newspaper boxes, said Huang Wanqing, deputy editor-in-chief of the Chinese-language edition of The Epoch Times.

He said the outlet is independent and truthfully covers issues relating to China. “The Chinese Communist Party is most scared of our reporting,” he said.

A March report by Reporters Without Borders (RSF) said that most overseas Chinese-language media outlets are co-opted by the Chinese regime. The report identified The Epoch Times, as well as its affiliate NTD, as among the few truly independent diaspora media.

Incidents of sabotage, Huang said, tend to escalate when there is major news relating to China, such as the protests in Hong Kong against the regime’s encroachment on the city’s autonomy.

Over the weekend, more than 1.7 million Hongkongers braved heavy rain to participate in a peaceful march protesting a now-suspended extradition bill that would allow people to be sent to mainland China for trial. The march was live-streamed by the Chinese-language Epoch Times in partnership with NTD, and viewed by around 20,000 people, Huang said.

Last week, the Hong Kong franchise of 7-Eleven pulled the city’s edition of The Epoch Times from its shelves halfway into its contract. The move—which also occurred not long after the edition switched from free distribution—prompted local concerns that the Chinese regime had pressured the franchise into cutting off The Epoch Times amid escalating protests in Hong Kong.

“We can’t see any reason but the pressure from the Chinese authorities for this withdrawal,” Cédric Alviani, East Asia bureau director at RSF, told The Epoch Times.