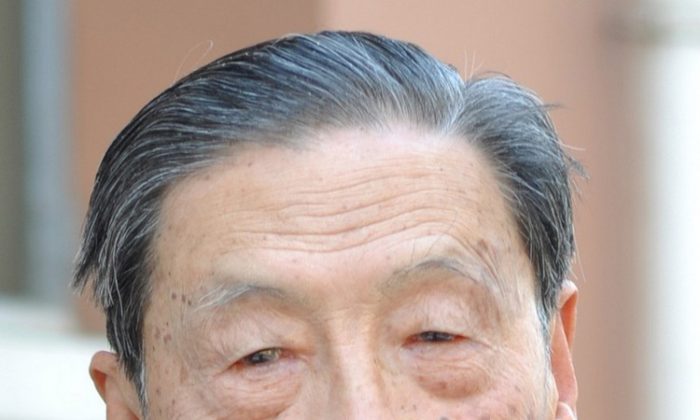 A free market think tank in the U.S. has given an award and $250,000 to a Chinese economist, setting off discussion, praise, a blitzkrieg of censorship, and harsh attacks on the Chinese Internet.

The Milton Friedman Prize for Advancing Liberty was given to Mao Yushi, 83 this year, by the Washington-based Cato Institute on March 29, along with the cash prize.

Mao Yushi is one of the most well-known pro-reform and free-market economists in China. He founded the Unirule Institute of Economics with several peers in 1993 as a vehicle for his ideas, and has published 15 books on market economics. In 2011, he wrote a scathing article laying out the crimes of the Mao Zedong regime, receiving death threats from enraged Maoist and regime-boosters.

The reception in China of the award to Mao Yushi has broken along the lines of the power struggle currently roiling Beijing.

It has been vociferously condemned by “leftists,” who have been on the defensive recently. Bo Xilai, the former Chongqing Party chief and heir apparent to domestic security czar Zhou Yongkang, was fired on March 15 and is believed to be under house arrest. Fifty of Bo’s cronies have since been arrested, while Premier Wen Jiabao has been arguing that China should proceed with political and economic reform.

Wu Fatian, a well-known leftist commentator, attacked Milton Friedman, the Cato Institute, and Mao Yushi. “It’s an organization that agitates for extreme economic liberalization and privatization. They once ‘tested’ their theory in Chile … completely ruining the country and bringing social turmoil,” he wrote.

More unrestrained critics, “leftists,” and those who align themselves with the regime, call Mao Yushi a “traitor to China” and a “running dog,” according to Hong Kong-based Phoenix TV.

Global Times, a nationalist newspaper published under the auspices of People’s Daily, the Party mouthpiece, published an editorial that gave guarded recognition to Mao Yushi. It noted that Mao Yushi and others like him have made “a certain contribution” to China’s development, but claimed that the reason he won the award was precisely because of “China’s rise.” No one should try to stop that rise, the piece intoned.

The award was also construed as part of a plot to enhance the forces of “liberalization” in China, which is, in the view of the Global Times writer, a decidedly bad thing.

One officially approved media outlet, Guangming Daily, a Party mouthpiece aimed at intellectuals, carried an interview titled Mao Yushi: My Being Awarded the Milton Friedman Prize Shows China’s Success. But censors may have had their way with most of it.

Phoenix reposted the essay, citing Guangming as the source. But the version on Phoenix was over twice as long as that on the Guangming website, suggesting that the second half of the interview—which recounted Mao Yushi’s persecution during the Cultural Revolution, and many of his academic achievements—was later deleted on the Guangming site.

But for those who harbor wishes for political change in China, the award was a small ray of light. Mao Yushi is portrayed as the epitome of the Confucian gentleman-scholar, fearlessly presenting his ideas for economic reform and the path for a better future for China, and taking criticism in stride. He is a key public intellectual in China for the forces that advocate political reform.

Many of China’s young people have been influenced by Mao Yushi’s thought and stance, which is often openly and harshly critical of the Communist Party and its dictatorship.

Their say on the matter was suppressed by censors, however, according to WeiboScope Search, a cataloger of deleted posts on Sina Weibo, China’s major microblog service. Hundreds of posts about Mao and the award were purged from Weibo beginning March 29, when the award was announced. Many noted that Mao Yushi would be giving away all his prize money; others say, “Progress has been made for human rights in China!” Mao Yushi was called “the model of a scholar” and a “gentleman of China.”

It is unclear whether Mao Yushi will have any trouble getting a visa and traveling freely to the United States for the May 4 award ceremony. Jamie Morris, a media relations manager at the Cato Institute, said they were working on the travel arrangements.

In the Guangming interview, Mao said that he is very pleased to be given the award, and plans to attend the ceremony in Washington, D.C., with his wife. His speech is already being prepared, he said. It will be about, “How man has sought freedom for thousands of years, what freedom truly is in the end, why freedom is so important, why it’s so hard to obtain, and how you can obtain it.”

In the Guangming interview, Mao says he is not fazed with the public attacks. “Compared to the Cultural Revolution and the anti-rightist movement,” he says, “this kind of abuse is much more civilized.”