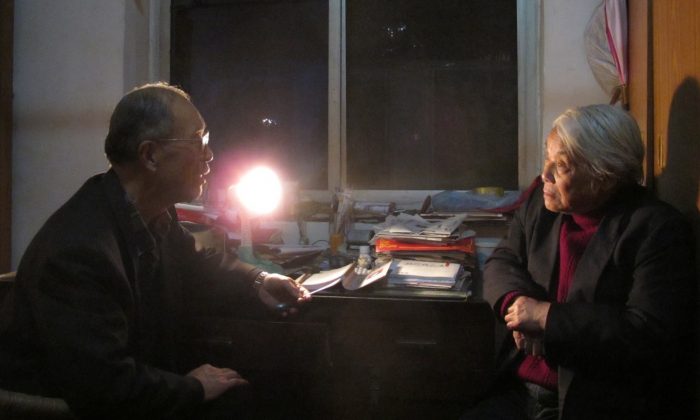 Zeng Boyan, a former newspaper editor, interviews Lin Xianjun, one of Dabao's survivors. Zeng worked for years to uncover the story of Dabao, before filmmaker Xie Yihui created the documentary about it. (Ai Xiaoming)
China

“When I die, bury me on the sunny side of the hill, because I’m afraid of the cold,” a child, now nameless and faceless, said to his fellow teenage prisoners over half a century ago. For the 4,000-5,000 juvenile prisoners at the Dabao labor camp, such requests were common, as the children were surrounded by death every day.

Built in a remote mountainous area in southwestern Sichuan Province in the late 1950s, the camp was a copy of the former Soviet Union’s homeless children “reformation” facilities.

Typically aged between 10 and 17, children ended up there because they were homeless, had committed minor offenses like theft, or were descendants of “counterrevolutionaries,” such as intellectuals labeled as “rightists.” The “education” they received included over 10 hours’ heavy labor during the day, followed by political “struggle sessions” at night.

“A survivor once told me, they were not humans during that time. They were ghosts,” director Xie Yihui said. “Their humanity was largely destroyed.” Xie worked with an investigative journalist to uncover the lost story of these children, and produced a new documentary called “Juvenile Laborers Confined in Dabao.”

The children were ordered to do heavy farm work or other tasks that even adults would shun. Those that worked too slowly were whipped. But the worst part was the hunger. Starving children would steal out to nearby villages in search of food. “I survived by theft,” said survivor Wang Yufeng. “I stole my life back.”

However, many were not so lucky. Children caught stealing were often cruelly punished by equally starved villagers: their fingers were cut off, they were burnt, or hot chilli was applied to the genitals. Stuffing everything that looked edible into their mouths, deaths or disabilities caused by consuming poisonous mushrooms, uncooked crabs or earthworms were not at all rare among the Dabao children.

If the days were nightmares, the nights were hell. For those who have not experienced Party-driven episodes like the Cultural Revolution, the political struggle sessions that characterized Mao Zedong’s era are inconceivable. Just like adults all over the country, the children were encouraged, incentivized, and forced to identify and report “enemies” among their friends and family.

The accusations were based on slips of the tongue or an incorrect facial expression, but the punishments were brutal. Collective verbal insults and physical torture, called struggle sessions, were the most common; violence quickly escalated as those accused of sympathizing with victims became targets themselves.

Dabao girls invented torture methods to use against each other during these sessions, such as poking nipples with a needle, or scrubbing the vagina with a toothbrush.

By 1961, when the children began to be released in batches, at least 2,600 of the original inmates had perished. Survivor Yan Jiasen said 12 children died in one day, and he himself was once thought dead–he was thrown into a pile of little corpses and spent a night there, unconscious. “I was woken up by rain the next day, and crawled back to the camp,” Yan said.

After the camp was shut down in 1962, survivors mostly became child workers as “reformed” people, while the dead were unceremoniously interred near the camp in unmarked graves. None of the deaths were officially documented.

For a long time, the only person trying to uncover this piece of history was Zeng Boyan, a former newspaper editor, who was imprisoned at the nearby adult labor camp in 1958. His efforts were mostly fruitless until rights activist and independent documentary maker Xie Yihui read about Dabao in one of Zeng’s books, and determined to help him piece together the story.

Together the two interviewed many people, from survivors, and local residents to labor camp wardens, and created the documentary titled “Juvenile Laborers Confined in Dabao.” The film debuted on May 1 in Hong Kong and Taiwan, along with another documentary, “Women Above Ghost’s Head,” about much more recent torture in a women’s labor camp in northeast China. “Juvenile Laborers Confined in Dabao” is scheduled to premiere in Switzerland and the United Kingdom in September.

Director Xie Yihui also plans to make the documentary available online for a fee, with the aim to reach more people and create a greater impact. “I hope to represent the truths of that piece of history through this documentary, to preserve the history so people can learn from it,” Xie told Radio Netherlands Worldwide.

“‘Juvenile Laborers of Dabao’ should not be left in the archive. It should be part of social changes, and we should leverage the power of the movie to push for the termination of the labor camp system,” he said.

Chinese rights activist professor Ai Xiaoming commented in a blog post that the Dabao camp was China’s juvenile Auschwitz, and a memory of genocide. “The survivors’ accounts challenge the bottom line of humanity, and the impact is almost suffocating,” he said. “The movie is a deadly blow to the anti-humanity, anti-human system” of China’s re-education-through-labor camps, he said.