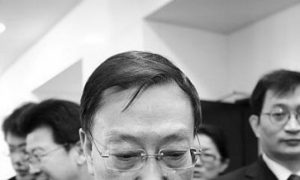 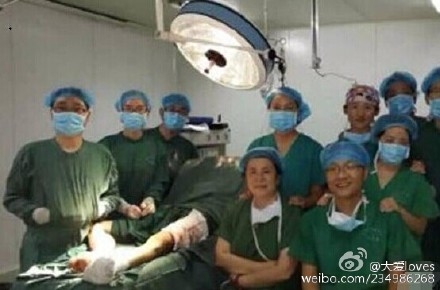 In a screenshot from the mainland Chinese social media platform Sina Weibo, a group of doctors and nurses take photos during surgery on Aug., 15, 2014. (Epoch Times)
China

Several photos of a group of doctors and nurses posing at a surgical table while a patient lay unconscious on it have been spreading on the Chinese internet, attracting loud condemnation.

The photos were posted on the Chinese-language social media platform Sina Weibo on Dec. 20 by the net user going by the name “When Weimei is not beautiful.” That person claims to be a doctor who got the photos from a friend working at a hospital in Xi’an City of northwestern China’s Shaanxi Province.

“As a doctor, I want to say, ‘what are you doing during surgery?’ No wonder the doctor-patient relationship is so difficult nowadays,” “When Weimei is not beautiful” wrote when posting the photos.

One of the photos shows five doctors and nurses in surgical suits and masks striking poses next to the surgical table, while another three doctors continue doing surgery on an unconscious patient.

Another photo shows the doctors doing the surgery looking at the camera while their hands hold surgical tools. Meanwhile, several other doctors and nurses raise their hands in peace signs, a very typical pose for taking selfies in China.

Many on the Internet have condemned such picture taking as disrespectful and irresponsible to the patients. “Doctors take selfies at the surgical table. Where do their medical ethics go? If it was your mother lying on the surgical table, would you do the same thing?” Weibo user “Best Samsung” commented.

After the photos caused media and mass public attention, the Xi’an Bureau of Public Health published a statement on Dec. 21, confirming what it called the “selfie incident” and announcing those involved were being punished..

After investigation, the photos were found to have been taken on Aug. 15 in Fengcheng Hospital, a private medical institute in Xi’an, the statement says. The doctors and nurses took the photos as a souvenir because the hospital was going to move the surgical theater to another place, it says.

All the people involved in taking the photos were punished by having bonuses withheld for three months. Also, they are required to write a paper reflecting on their conduct. In addition, the vice president of the hospital, the department director, and the head nurse are said to have been dismissed, and the hospital president put on probation.

The doctor and patient relationship has rapidly deteriorated in China over the past few years due to medical corruption, high costs, and low quality service, among other causes. Disputes between doctors and patients have on several occasions led to fatalities, as patients have violently attacked doctors and nurses.