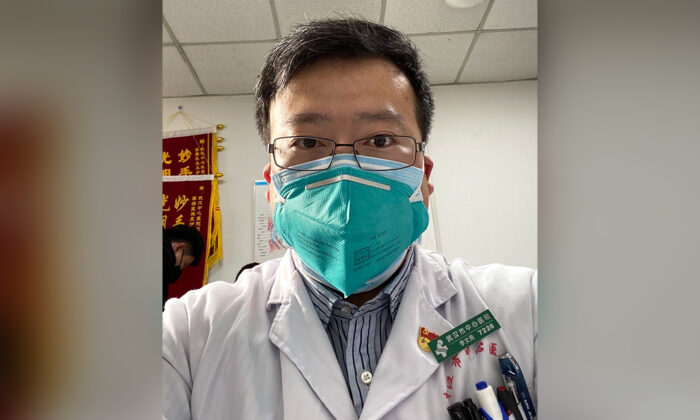 Chinese Doctor Tried to Save Lives, but Was Silenced and Became Infected With Coronavirus

On Dec. 30, Li Wenliang dropped a bombshell in his medical school alumni group on the popular Chinese messaging app WeChat: seven patients from a local seafood market had been diagnosed with a SARS-like illness and quarantined in his hospital.

Li explained that, according to a test he had seen, the illness was a coronavirus—a large family of viruses that includes severe acute respiratory syndrome (SARS).

Memories of SARS run deep in China, where a pandemic in 2003 killed hundreds following a government cover-up. “I only wanted to remind my university classmates to be careful,” he said.

Li, a 34-year-old doctor working in Wuhan, the central Chinese city at the epicenter of the deadly coronavirus outbreak, told his friends to warn their loved ones privately. But within hours screenshots of his messages had gone viral—without his name being blurred. “When I saw them circulating online, I realized that it was out of my control and I would probably be punished,” Li said.

Soon after he posted the message, Li was accused of rumor-mongering by the Wuhan police. He was one of several medics targeted by police for trying to blow the whistle on the deadly virus in the early weeks of the outbreak.

From an intensive care bed in hospital, Li told CNN he was confirmed on Feb. 2 to have contracted the virus.

His diagnosis has sparked outrage across China, where a backlash is growing against state censorship around the illness and an initial delay in warning the public about the deadly virus.

Summoned by the Police

On the same day in December that Li messaged his friends, an emergency notice was issued by the Wuhan Municipal Health Commission, informing the city’s medical institutions that a series of patients from the Huanan Seafood Wholesale Market had an “unknown pneumonia.”

The notice came with a warning: “Any organizations or individuals are not allowed to release treatment information to the public without authorization.”

In the early hours of Dec. 31, Wuhan’s health authorities held an emergency meeting to discuss the outbreak. Afterward, Li was summoned by officials at his hospital to explain how he knew about the cases, according to state-run newspaper Beijing Youth Daily.

Later that day, the Wuhan authorities announced the outbreak and alerted the World Health Organization. But Li’s troubles did not end there.

On Jan. 3, Li was called to a local police station and reprimanded for “spreading rumors online” and “severely disrupting social order” over the message he sent in the chat group.

In that message, Li said the patients had been diagnosed with SARS, citing the test result that showed the pathogen tested positive for the SARS virus with a high “confidence coefficient”—a measure indicating the accuracy of the test. He clarified in a subsequent message that the virus was actually a different type of coronavirus, but the screenshot of his first message had already spread online.

Li had to sign a statement—which CNN has seen a photograph of—acknowledging his “misdemeanor” and promising not to commit further “unlawful acts.”

He feared he was going to be detained. “My family would worry sick about me, if I lose my freedom for a few days,” he told CNN over a text message on WeChat—he was coughing too much and breathing too poorly to speak over the phone.

Luckily, Li was allowed to leave the police station after an hour.

The Wuhan police have not responded to CNN’s request for comment at the time of publishing. The Wuhan Municipal Health Commission declined to comment.

The ophthalmologist returned to work at Wuhan Central Hospital feeling helpless. He said: “There was nothing I could do. (Everything) has to adhere to the official line.”

On Jan. 10, after unwittingly treating a patient with the Wuhan coronavirus, Li started coughing and developed a fever the next day. He was hospitalized on Jan. 12. In the following days, Li’s condition deteriorated so badly that he was admitted to the intensive care unit, and given oxygen support.

On Feb. 1, he tested positive for coronavirus.

Playing Down the Outbreak

From the start, the Chinese authorities wanted to control information about the outbreak, silencing any voices that differed with their narrative—regardless of whether they were telling the truth.

On Jan. 1, the Wuhan police announced it had “taken legal measures” against eight people who had recently “published and shared rumors online” about the pneumonia-like illness and “caused adverse impacts on society.”

“The internet is not a land beyond the law … Any unlawful acts of fabricating, spreading rumors and disturbing the social order will be punished by police according to the law, with zero tolerance,” said a police statement on Weibo, Chinese regime’s Twitter-like platform.

The police announcement was broadcast across the country on CCTV, the Chinese regime’s state broadcaster, making it clear how the Chinese government would treat such “rumormongers.”

In the two weeks that followed, the Wuhan Municipal Health Commission remained the only source for updates on the developments of the outbreak. Chinese scientists identified the pathogen as a new coronavirus on Jan. 7. For about a week, no new confirmed cases were announced. Health authorities maintained there was “no obvious evidence for human to human transmission,” no infection of healthcare workers, and that the outbreak was “preventable and controllable.”

On Jan. 31, Li wrote in a post on Weibo how he felt during that period: “I was wondering why (the government’s) official notices were still saying there was no human-to-human transmission, and there were no healthcare workers infected.”

Then came a sudden jump in infections. The central government took over and, on Jan. 20, Chinese leader Xi Jinping ordered “resolute efforts to curb the spread” of the coronavirus and stressed the need for the timely release of information—it was the first time Xi had publicly addressed the outbreak.

Later that evening, Zhong Nanshan, a government-appointed respiratory expert known for fighting SARS 17 years ago, declared on state broadcaster CCTV that the new coronavirus was transmissible from person to person.

Now, the virus has spread to every region in the country, including the far western frontier of Xinjiang and the remote region of Tibet.

In an interview with CCTV on Jan. 27, Wuhan mayor Zhou Xianwang admitted his government did not disclose information on the coronavirus “in a timely fashion.”

He explained that under Chinese law on infectious diseases, the local government first needs to report the outbreak to national health authorities, and then get approval from the State Council before making an announcement.

“For the late disclosure, I hope everyone can understand that this is an infectious disease, and relevant information has special channels to be disclosed in accordance with law,” he said.

By late January, the Wuhan government’s mishandling of the outbreak was becoming well-understood in China. Many online thought of the group of eight “rumormongers,” saying their early warnings could have saved hundreds of lives.

Calls for the eight to be vindicated grew—even in state media. Xi’s call for the timely release of information was seen as a green light to report on the coronavirus and Chinese journalists began producing in-depth coverage and hard-hitting investigative reports. The state-run newspaper Beijing Youth Daily interviewed Li and the article went viral. The piece was censored within hours, but the uproar remained.

“It might have been a fortunate thing for containing the new coronavirus, if the public had listened to this ‘rumor’ at the time, and adopted measures such as wearing masks, strict disinfection and avoiding going to the wildlife market,” the Supreme Court commentary said.

Bowing to pressure, the Wuhan police issued a statement the next day, saying the eight people had only committed “particularly minor” misdemeanors for spreading “unverified information.” It said they had only been summoned for a talk and not detained or fined.

On Saturday, another “rumormonger” came forward with her story in the Chinese press.

Xie Linka, an oncologist at Wuhan Union Hospital, told Chinese media she received a warning from police after sending an alert to her colleagues in a WeChat group on the evening of Dec. 30.

In the message, Xie relayed a warning from fellow doctors about an infectious disease: “Don’t go to Huanan Seafood Wholesale Market in the near future. Several people were found to have contracted an unknown pneumonia similar to SARS there. Today our hospital has received multiple patients from the market. Everyone please remember to wear masks and ventilate properly.”

Now recovering in a quarantine ward, Li said he was not sure if he was one of the eight “rumormongers.” But he felt relieved after reading the Supreme Court commentary, taking it as a sign that the central government is against giving him a harsh punishment.

On Li’s Weibo, tens of thousands have left comments thanking him for speaking out and wishing him a speedy discovery.

“Dr Li, you’re a good doctor with conscience. I hope you stay safe and sound,” read one of the top-rated comments.

Others have questioned what could have been if Li’s warning had been heeded.

“If Wuhan had paid attention to [his warning] back then and taken active preventive measures,” wrote another Weibo user, “where we stand now a month later could be a completely different picture.”