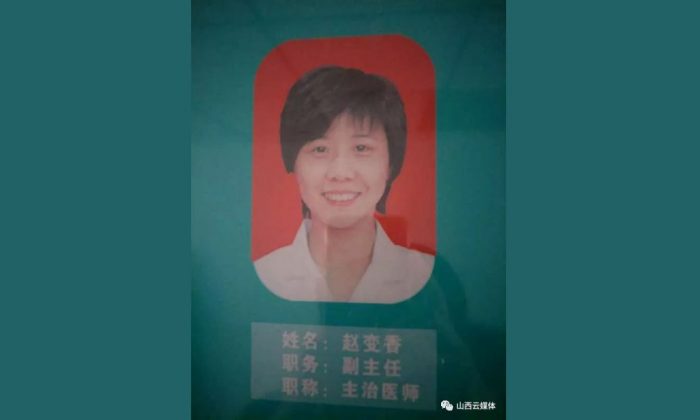 Zhao Bianxiang, 43, a doctor at a hospital in China's Shanxi province, died after working 18 hours straight. (Cloud Media)
US News

Chinese Doctor Collapses in Front of her Patients, Dies after Working 18 Hours Straight

A female doctor in China collapsed in front of her patients and soon died after working for 18 hours straight.

Colleagues described her as a hard worker who would never turn down a request for help if someone asked. They said even on her days off, she would still come in to help.

During cold weather, the respiratory unit is usually busier than at other times of the year, the Evening News reports. A colleague said that, in addition to the higher caseload, they were given a special assignment.

“I saw her in the hospital the whole day last Tuesday. She was still working in the afternoon on Wednesday. I asked her, ‘Did you not rest?’ Dr. Zhao said, ‘Too busy,’” a patient told the Evening News.

She started work at 6 p.m. on Dec. 28, and collapsed at about noon on Dec. 29 in front of her patients. She was rushed to the intensive care unit, but her colleagues were unable to revive her.

According to the Evening News, she died of a subarachnoid hemorrhage, or bleeding in a part of the brain. A 2007 study in the journal Lancet said that an aneurysm is the cause of the bleeding in about 85 percent of cases. A sudden headache is the condition’s main symptom, it says.

It’s unclear whether Zhao’s long hours contributed to her death.

According to state-run media, feeling overworked in China is not uncommon.

Xinhua News reported in December 2016 that some 600,000 people are “overworked,” which it describes as acute illness due to mental stress, working long hours, or physical strain from work.