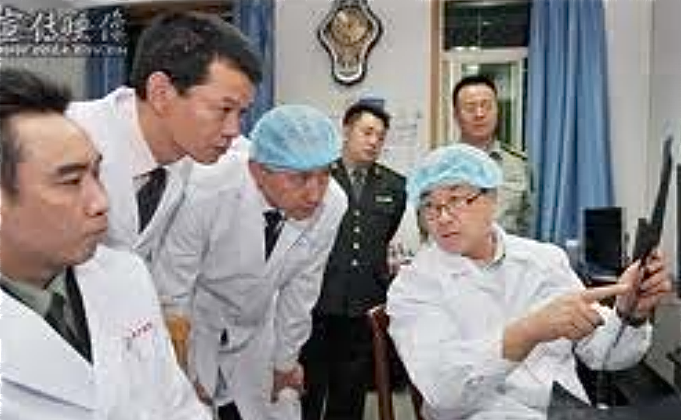 Wang Lijun is pictured showing military officials through his laboratory in Jinzhou City, Liaoning Province, which he ran out of the Public Security Bureau when he was PSB chief there. According to a 2006 admission, he conducted "thousands" of executions and organ transplantations. (Courtesy of WOIPFG)
China

A high-ranking retired Chinese military doctor has been caught in a phone call placed by a human rights group admitting that he used the organs of political prisoners in a joint research project with Wang Lijun, the former right-hand man to disgraced Party official Bo Xilai.

Chen Rongshan, former director of Urology of the 205 People’s Liberation Army Hospital in Jinzhou, was asked in a May 25 telephone call: “Wang mentioned to us that some of your organ donors were imprisoned Falun Gong practitioners. Is that true?”

Chen answered: “That had been approved by the court.”

Falun Gong is a Chinese spiritual practice that has been persecuted by the Chinese Communist Party since 1999.

The human rights researcher asked again if it had “gone through the court.” Chen affirmed.

The caller, a researcher with the World Organization to Investigate the Persecution of Falun Gong (WOIPFG), a human rights research and advocacy group, had presented himself as a member of a “cross-department special investigative team” for the Wang Lijun matter.

Wang Lijun is widely known to be under investigation by the CCP. On Feb. 6 he fled to the U.S. Consulate in Chengdu and passed to U.S. consular officials documents that are believed to have detailed crimes by Bo Xilai and Bo’s wife Gu Kailai, including information about organ harvesting. After surrendering to central Party authorities, Wang has been under investigation, was purged from the Party, and is due to be tried for treason.

When the WOIPFG investigator posed a follow-up question, asking about more details about where the Falun Gong practitioners were housed in connection with the organ harvesting, Chen Rongshan balked: “Let me say, I mean, I’m saying, you don’t talk, ask me about this now, OK?”

He added: “If you have to ask, go through the political division of the hospital, OK?”

The investigator and Chen tussled for another minute before the latter hung up. But the researcher had already gained the admission.

This was not the first such admission. Dozens of calls are available online where the WOIPFG investigator, whose voice in the digital recordings was tweaked to sound as though he had just inhaled helium to protect his identity. In the recordings he elicits admissions from Party officials of participating in these crimes.

Chen Rongshan was most recently targeted because he had worked with Wang Lijun on a “research project” related to organ transplantation. Nearby in Jinzhou City, Liaoning Province, Wang, as head of the Public Security Bureau (PSB), had run the “On-site Psychological Research Center,” a laboratory connected to the PSB. There, according to his remarks in a 2006 award speech, he carried out executions, organ harvesting, organ transplants, and related experimentation.

The award, a “special contribution award,” was given by the Guanghua Science and Technology Foundation in September 2006. Guanghua, according to its website, is a charity that promotes science under the direct leadership of the Communist Youth League, one of the Chinese Communist Party’s (CCP) mass organizations used for recruitment and dissemination of Party dogma to young people.

Wang said in his acceptance speech, which is still available online, that he had participated in “thousands” of on-site organ transplantations.

Wang Lijun was already close to Bo Xilai when he was PSB chief in Jinzhou. Later when Bo was transferred to Chongqing, Wang followed him and was installed as his chief of police. Analysts are confident that Bo was at least intimately aware of Wang’s activities.

Experts interviewed at the time of the discovery of this award understood “on-site” to indicate that the execution and organ removal happens near or at the same site as the transplantation to a new host.

The experts, including Ethan Gutmann, a journalist whose research focuses on the Chinese regime’s abusive organ transplantation practices, and David Matas, a lawyer who co-authored the seminal text on organ harvesting from Falun Gong practitioners, were also confident that, judging by Wang’s remarks, the prisoners were alive when their organs were removed, and would have died in the process of extraction.

Gutmann and Matas also thought it was probable that many of those thousands of organs were harvested from practitioners of Falun Gong.

Wang had worked together with the 205 Hospital, Chen’s department, on a “Key Research Project of Trauma-Free Anatomy in the Asia-Pacific Region,” according to the World Organization to Investigate the Persecution of Falun Gong.

In the phone call Chen was asked to confirm that collaboration, and he did, before being asked to admit to using Falun Gong organs.

Dr. Torsten Trey, the co-editor of a recently published book on the abuse of organ transplantation in China, State Organs, said that he thought the telephone call and admission were credible, and fit into a broader pattern.

“When Dr. Chen refers to the court that has approved the cases of Falun Gong practitioners as organ source, he actually indicates that the organ harvesting from Falun Gong practitioners is state sanctioned, as state institutions and courts, are involved in the approval process,” Dr. Trey said in a written response, after being shown a transcript of the telephone call.

“People under the communist rule are usually very afraid of making a mistake, because it could lead to fatal consequences,” Trey said. So by directly referring to the court’s approval of the organ sourcing, “he actually strongly confirms the statement,” Dr. Trey said. “It’s a double-yes.”

The fact of state involvement further indicates, Dr. Trey said, that the harvesting of Falun Gong has not been done by underground syndicates or a few doctors, “but with the full knowledge and approval of the state.”

He says that global health bodies like the World Health Organization and World Medical Association should be inquiring into court records that would have been produced in the course of providing living Falun Gong adherents for people like Wang Lijun and Chen Rongshan.

Dr. Trey also pointed out that the research collaboration between Wang and Chen, involving “organ-transplantation-after-drug-injection” potentially involved human experimentation “in which Falun Gong practitioners were subject to ‘drug injections’ and that after the drug injections, organs were possibly removed while the victims were still alive.”

He added: “This is very likely, because it wouldn’t make sense to inject drugs to a cadaver and then remove organs for transplantation.”

Chen’s work has received recognition previously. On May 23, 2006, Liaoxi Economic Daily ran an article on its B4 print edition titled “A Military Doctor’s Noble Realm and Pursuit.”

The article said: “Chen Rongshan, Director of Urology of 205 Hospital of PLA in Jinzhou, has performed as many as 568 kidney transplants in recent years … His reputation drew patients from Taiwan, Korea, and Malaysia.”

With the publication of the recent admission however, Chen may have difficulty getting into the United States, where his daughter currently lives. He last visited her with his wife in early 2012, according to WOIPFG. The group plans to pass the record of their investigation into Chen to “concerned U.S. departments.”

The U.S Nonimmigrant Visa Application Form DS-160, since June 2011, asks whether the applicant “has participated in forced human organ transplantation.” The Visa applicants who answer yes to this question are often denied a visa.

The State Department was not immediately available for comment.

On June 13, 2012, another investigator called Chen pretending to be a secretary for Wang Jia. Wang Jia is the former director of the 205 PLA Hospital, and currently a deputy minister of the Ministry of Health of the Joint Logistics Department in the Shenyang Military Base.

“The former director asks me to send you a message,” the caller said.

After Chen began to engage in the conversation, the investigator said, “No matter which supervising department comes to investigate the removal of organs from Falun Gong practitioners for organ transplants, you must not disclose any secret. Can you do that?”

“Yes, yes, yes,” Chen said. “Just don’t be careless in talking about this and it’ll be fine, right?”