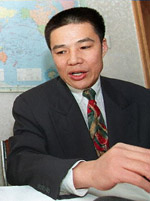 Peng Ming, a well-known dissident in China, will spend the rest of his life in prison. This was the decision handed down on Wednesday, October 12, by the Second Intermediate People’s Court of Wuhan, Hubei province.

Peng Xing, Peng Ming’s sister, told Radio Free Asia (RFA) last Thursday that Peng had been sentenced to life time imprisonment and lifelong deprivation of political rights after being found guilty on charges of organizing and leading a terrorist organization. Xing asserts that her brother was illegally extradited from Burma to stand trial, and that he did not receive a fair hearing.

The evidence presented by the prosecution included various articles written by Peng that had been published on the Internet, his book entitled “Democratic Project,” which urges the people of China to overthrow the current government through violent means, and his direction of an unsuccessful kidnapping of a group of corrupt officials.

Peng’s lawyer and his family members were present at the sentencing. Peng said afterward that he is not going to appeal, though he believes it was illegal for the Chinese judicial authority to extradite him from Burma to China. In his opinion, the evidence against him was not sufficient to merit this, and the law was unjustly applied to his case.

Peng Ming is quite a famous dissident in his home country. He is well known for having organized the China Development Federation in Beijing, as well as for his several books on China’s political reform.