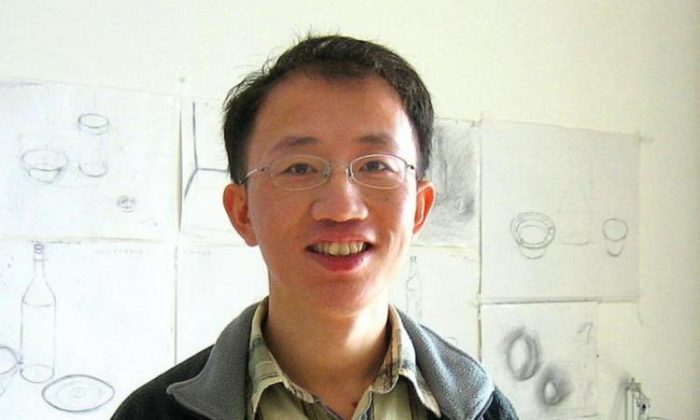 In 2008, the European Parliament honored Chinese writer Hu Jia with the "Sakharov Prize for Freedom of Thought." The dissident is now under arrest in Beijing. (Verna Yu/APF/Getty Images)
China

The Chinese dissident Hu Jia was apprehended from his home by 20 policemen and is being held at a detention center in Beijing for unspecified reasons, according to his wife and supporters.

Zeng Jinyan, Hu’s wife, first tweeted the news at around 6:30 p.m. local time on June 12; Zeng and the couple’s daughter were not in Beijing and did not know further details, according to the tweet. She said she found out from family.

Friends and supporters spread the news quickly and began bombarding Beijing public security bureau offices with phone calls asking about the dissident. Telephone numbers for police lockups were posted to Twitter as dissidents described their failure to gain information from their calls.

“I called the Tongzhou Zhongcang local police station number, and as soon as they heard ‘Hu Jia’ they said they didn’t know, and hung up right away. It seems that’s where he is. Call repeatedly,” wrote one proactive supporter.

The phone was not picked up when, after midnight in Beijing on June 12, The Epoch Times called the numbers provided by dissidents on Twitter.

One observer commented on the timing of the arrest. “At the moment that the Chinese authorities publish the ‘National Human Rights Action Plan of China’ 20 Beijing police take Hu Jia away again.”

Hu Jia was awarded the Sakharov Prize for Freedom of Thought in 2008 for his activism associated with environmental issues, HIV/AIDS advocacy, and calling for redress of the 1989 Tiananmen Square massacre. He is also known to defend and publicize the efforts of, and abuses against, other dissidents like himself.

In response to the death of dissident Li Wangyang, who authorities claimed committed suicide but which his family hotly disputes, Hu Jia declared on Twitter that he would never kill himself. According to a translation by Shanghaiist, Hu Jia wrote on Twitter: “‘I, Hu Jia, will not commit suicide at any time, because of anyone, in any situation, or for anything.’ If you are a political prisoner, dissident, activist, or citizen who is illegally detained by national security on a regular basis, I suggest you get a copy of this notarised,” Hu Jia wrote. “This country has no lack of people being ‘suicided’.”

UPDATE: Hu Jia was released on the morning of June 13 after being detained for eight hours. He was picked up by police because he was planning to visit the mother of the blind activist Chen Guangcheng, who recently left China, in Shandong Province. Hu says he now has four security officers watching him. “Taxpayers money is being squandered massively on this security maintenance system,” he wrote on Twitter.