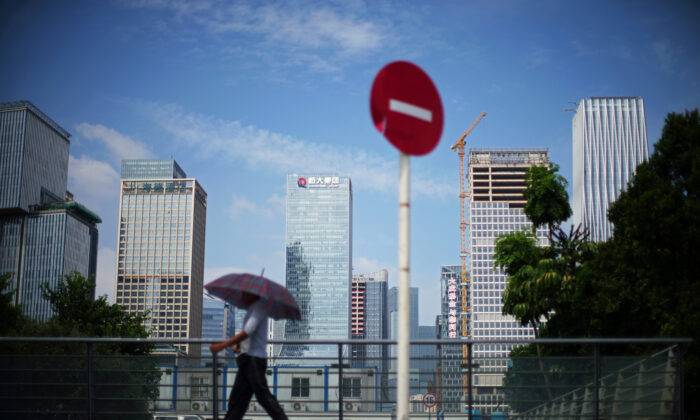 A man walks past a 'No Entry' traffic sign near the headquarters of China's Evergrande Group in Shenzhen, Guangdong Province, in China on Sept. 26, 2021. (Aly Song/Reuters)
China Business & Economy

Chinese Developers Have Billions in Debt Off Balance Sheet: JPMorgan

China’s embattled developers, Evergrande and other property companies, have reportedly shifted billions of dollars in debt to off-balance sheet vehicles, according to recent research from investment bank JPMorgan. Once this additional debt is counted in, the leverage ratios rise distinctly.

The bank’s China and Hong Kong property analysts say that Evergrande’s case appears to be the most extreme.

“It is possible that the real gearing could be even higher, as data on some off-balance sheet debt is not publicly available,” the JPMorgan analysts added, noting that the so-called “disguised” debt added up to 55 percent of Evergrande’s overall debt.

Balance sheets usually provide a snapshot of a company’s finances as of the date of publication, showing what it owns and owes.

Evergrande appears to have shifted some of its interest-bearing borrowings to debt held off its balance sheet, as well as to non-debt instruments such as “commercial paper, wealth management products, and perpetual capital securities,” according to the analysts.

They estimate the company’s net gearing was at least 177 percent in the first half of this year, rather than the 100 percent reported.

Net gearing refers to a company’s ratio of debt to equity.

With liabilities of 1.97 trillion yuan ($305.7 billion), Evergrande has been struggling to keep from defaulting on debts as it liquidates assets to address its cash crunch. Particularly, after failing to repay two required interest payments worth a combined $131 million last month, the company faces $150 million in offshore payment obligations next week.

In August 2020, the People’s Bank of China announced limits on borrowing by developers: a 70 percent ceiling on the debt-to-asset ratio (excluding presales); a 100 percent limit on net debt-to-equity ratio; and cash holdings to cover short-term debt.

Other large Chinese developers identified by JPMorgan as having gearing levels likely higher than publicly disclosed include R&F Properties at 139 percent versus 123 percent reported, Sunac China Holdings at 138 percent versus 87 percent, and Country Garden at 76 percent versus 50 percent.

Evergrande’s share trading in Hong Kong has been suspended since Oct. 4 ahead of an announcement about a “major transaction,” but no report has materialized so far.