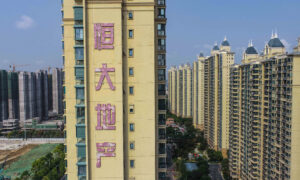 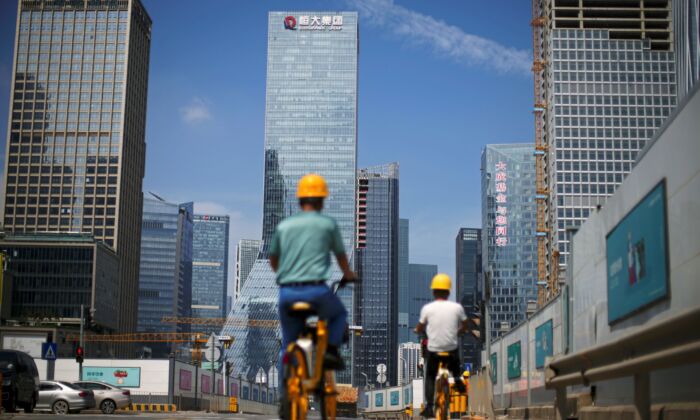 Troubles in China’s property sector are beginning to surface after more developers joined Evergrande’s debacle and are also struggling to pay their debts.

“If Evergrande goes down like this, then I believe this is the domino,” said a Taiwan-based financial expert, as the housing bubble is pushing the property giant to the brink of collapse.

“Broader financial stress may emerge,” the International Monetary Fund said in an October report, if the situation of Evergrande turns for the worse.

The world’s most indebted developer has been seeking to sell billions of its assets, including its Hong Kong headquarters, battling a cash crunch that could swamp the company. Evergrande agreed to sell its stake in Shengjing Bank to a state-owned company for $1.5 billion—just a tiny relief in its $300 billion in liabilities.

With hundreds of projects suspended throughout China, Evergrande has just missed the third round of interest payments on its international bonds this week.

“The gap between the high debt and stock market value is too large,” Taiwanese economic scholar Xie Jinhe said during a Chinese language program on NTD, an affiliate of The Epoch Times, on Oct. 12.  Shares of Evergrande on the Hong Kong stock market have plunged 80 percent so far this year.

As the housing bubble grew in China over the past decades, the once stunning Chinese property market saw home buyers pouring hard-earned savings into one apartment after another. Some estimate China’s $5 trillion property sector accounts for around one-quarter of its economy.

“From Beijing to Shanghai to Shenzhen, some of the house price to income ratio has reached 50 to 60 times. … Everyone is highly leveraged with large loans,” according to Xie.

China’s Evergrande crisis, and its possible domino effect, spotlighted the vulnerability of the housing sector. Debt pressures now extend far beyond what is workable.

Chinese property developers have $556 million worth of high-yield dollar bond coupons due this month, nearly $1.6 billion due before year-end, and Refinitiv data shows at least $92 billion worth of such maturities next year.

On Thursday, Rating agency Fitch downgraded property developer Modern Land to C from B. With $1.35 billion of bonds outstanding, the Beijing-headquartered company is seeking an extension of a bond due in three months to avoid a possible default.

More recently, Shanghai-based homebuilder Sinic Holdings said in an announcement (pdf) on Oct. 11 that it would be unable to repay a $250 million dollar bond due Oct. 18.

“We have to pay close attention to the adjustment of the real estate bubble in China this time,” said Xie. “If there is a major drop, the Chinese economy could be set back for 10 or 20 years.”