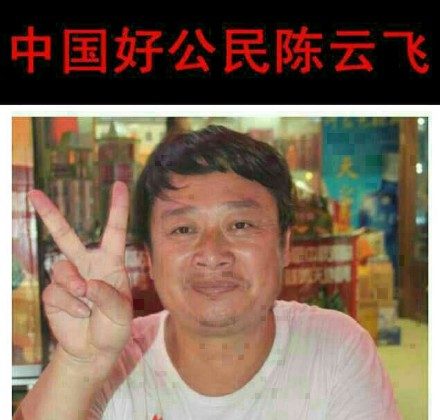 A Chinese activist in China’s southwest will face trial for democracy-related activism, his lawyer Ran Tong says. He has been detained since March last year after visiting the grave site of a Tiananmen Massacre victim.

Chen Yunfei, a witness to the brutal June 4 crackdown in 1989 that killed hundreds, perhaps thousands, of pro-democracy students, has for years used performance art to call attention to human rights abuses in China — with a focus on the legacy of Tiananmen.

Chen was originally scheduled to face trial on June 30 at the Huhou District Court in Chengdu Province, Ran, the lawyer, wrote on his Chinese Weibo account. But on June 28 the judge called lawyer and postponed the sentence, according to Canyu, an overseas democracy website. Lawyers said they still intend to appear at court as scheduled.

Chen paid annual visits to the memorials of Wu Guofeng and Xiao Jie, students of the prestigious Renmin University, who died in the June 4 massacre.

But soon after their recent trip on March 25, a squadron of over 100 Armed Police arrested Chen and another 20 activists. Chen was the only one not released, as the authorities prepared his political prosecution.

Concerned family members and fellow activists launched a campaign they called “Searching for Noble Citizen Chen Yunfei,” based both online and in the streets. This led the police to provide an official notice of criminal detention — after he’d spent over a month in custody.

The crime Chen is being charged with is “picking quarrels and stirring up trouble,” a vague provision that Communist Party authorities conveniently wield against political dissenters. The first charge against him, “incitement to subvert state power,” was dropped.

Instead, he says the entire episode is simply retaliation.

Chen Yunfei has been a thorn in the authorities’ side for years. In 2007 he managed to sneak into the Chengdu Evening News an advertisement saying: “Salute to the Unwavering Tiananmen Mothers,” on the anniversary of the June 4 democracy movement. This led to a six-month period of house arrest.

Liao Yiwu, a writer in exile and close friend of Chen Yunfei, remembers Chen as unconventional both in disposition and in apparel. The two could still drink together nonchalantly after Chen had been investigated and seriously beaten in custody. On one June 4 anniversary, Liao recalled, Chen donned a suit and tie with shorts, and walked into a blood donation van, offering his neck. He then began to tell the startled nurse about the June 4 massacre, suggesting that she report to the police that a “June 4th hooligan” was “disturbing the peace.”