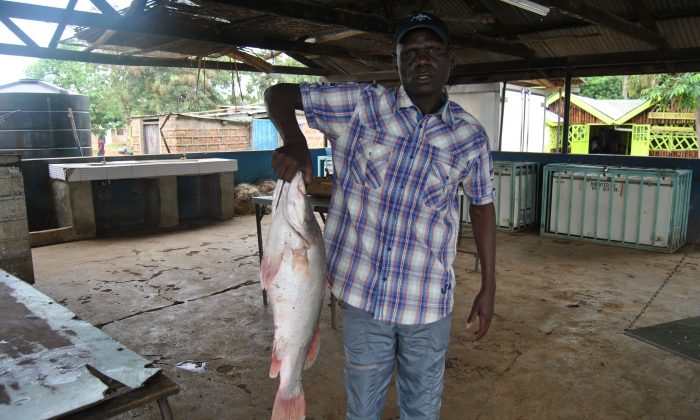 Benard Oluoch holds a Nile perch fish that he has received from fishermen at his shed in Dunga beach on Lake Victoria on June 11, 2019
Africa

KISUMU, Kenya—It’s midday at Dunga beach on the shores of Lake Victoria, and Benard Oluoch has just received the catch from fishermen who have come back from a night-long expedition. He is in charge of weighing and selling fish along the shore.

At the shed, the Nile perch is among the biggest fish being weighed here. The locals call it Mbuta, and according to Oluoch, it is currently the most valuable species among the fishing communities on Lake Victoria.

In the past two years, the price of the Nile perch has skyrocketed, thanks to Chinese demand for its swim bladder, also referred to as the fish maw, an organ responsible for buoyancy in fish. For centuries, wealthy Chinese have used such bladders to make soups thought to soothe the discomfort of pregnancy and cure joint pain, among other ailments, and also for making surgical thread for sewing up wounds.

The maw, known locally as mondo in the Luo language, can be used, as well, to make a water-resistant glue and also in the production of isinglass, a refining agent used in the manufacture of beer and wine.

“Ever since the Chinese demand for the maws, there has been a rush by the fishermen here to try to meet the demand for the Nile perch and, in the process, fishing for the bigger fish since their bladders would fetch better prices on the market,” Oluoch explains.

“They take it from me. Especially the Chinese, who are only interested in the mondo. If you got a 50 kilogram (about 110 pounds) Nile perch, it can have a 1-kilogram swim bladder and could fetch you KSh35,000 ($350). Smaller fish have smaller bladders, which we put together until it weighs a kilogram before we sell them to the Chinese,” Oluoch says.

Still at the shores, 25-year-old Eunice Akinyi is busy scaling and gutting Nile perch for clients who are buying for the fish from the fishermen and having them prepared and cleaned before reselling them at the market.

It’s women such as Akinyi that are mostly involved in the removal and sale of the fish maws, even though they don’t necessarily understand where it is taken to.

“At first, we would remove all the intestines, together with the fish maws, and throw them away; but recently, there have been some people who come here to buy it at higher prices than the fish itself,” said Akinyi, who has been working here for the past seven years. “I don’t know where they take them.”

China is taking advantage of this lack of knowledge among the fishermen and women of East Africa of the threat to the Nile perch, exploiting the region’s resources as it advances its colonization of the continent.

Oluoch says that since the Chinese started coming for and buying the maw, fishermen are now working day and night to catch the larger Nile perch for the better prices it fetches. It is feared that this might wipe out the fish, in a similar fashion to the baiji, a freshwater dolphin species that used to live in China’s famous Yangtze River.

Horace Owiti, a scientist at the Kenya Marine and Fisheries Research Institute warns that the demand has led to overfishing at the lake and that the fact that the larger Nile perch fish, which are responsible for spawning, are a target will hasten the demise of the species since there will be no more reproduction.

According to a report by the U.N. Food and Agriculture Organization (FAO), Nile perch is the dominant fish species in the export trade, accounting for about 90 percent in volume and value of Kenya’s total fish exports. The exported products of Nile perch include the fillet, whole body (gutted, headless), fish maws, and Nile perch bladder.

However, Kenya has only 6 percent of Lake Victoria’s fisheries, with 48 percent in Uganda and 51 percent in Tanzania. Even so, 77 percent of all fish caught in Kenya come from Lake Victoria, which is now the third-largest body of water in the country.

Owiti says that even though the Nile perch is the most valuable of the three main fish in Lake Victoria, many fishermen are now only hunting the fish for its swim bladder and they would gut the fish for the bladder and dispose of the fish at lower prices than the recommended market price.

“This perhaps would explain why of the seven to 12 fish fillet firms across the country, only one is barely surviving as we talk now,” Owiti says. “This would be because the firms required that all the Nile perch supplied there would be full without having been gutted, for the purposes of freshness and safety. This discouraged fishermen from supplying the fish to them when the Chinese came for the maw alone and at high prices.”