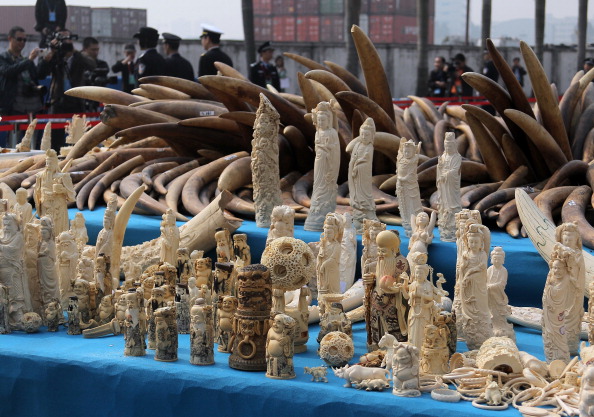 Illegal ivory is displayed before being crushed during a public event in Dongguan City, in southern China's Guangdong Province on January 6, 2014. (AFP/AFP/Getty Images)
Social Issues

In northern China, customs officials seized wild animal parts worth millions of dollars, in one of the largest smuggling cases in years.

According to a July 18 report by state-run news site China News, Chinese customs officials who were stationed at the Hulin Control Point—a land cargo port that borders Russia in Hulin City, Heilongjiang Province—stopped a Russian-style truck on April 26.

The officials were suspicious of the truck’s activity because it crossed into China twice in a little over a month and stayed in the country for a total of 32 days.

They began searching the vehicle and found a large amount of soybeans—but most looked old or infested with mold.

Then, in a hidden compartment inside the truck, officials found 1,276 pieces of antelope horns, 156 pieces of mammoth tusks, 406 pieces of walrus tusks, 2 pieces of elephant tusk, 70 bear teeth, 226 whale teeth, about 319 kilograms (about 703 pounds) of sea cucumber—considered a delicacy in some parts of China—44 pieces of bear bile, and 4 deer penises. The latter two are used in traditional Chinese medicine.

According to China News, eight suspects have already been detained.

China imposed a ban on elephant ivory sales beginning on Jan. 1, after years of unfettered poaching that led to China becoming the largest importer and end user of elephant tusks. In China, ivory is a highly coveted symbol of wealth usually seen in intricate carvings, trinkets, chopsticks, and other items.

Prior to the ban, China had allowed the sale of pre-convention ivory, which refers to products such as carvings and crafts acquired before the 1975 Convention on International Trade in Endangered Species of Wild Fauna and Flora was signed by China and other countries to protect wildlife, according to Reuters. Any ivory acquired after 1975 is considered illegal.

The trade in pre-convention ivory has been legally thriving in China and Hong Kong since 1975, which environmental activists have long asserted spurred demand for new acquisitions of ivory.

The ban, however, did not stop smugglers from continuing to bring ivory into China. According to a June 13 report by China News, between May 1 to June 13, customs officials at Nanning City in southern China near the Vietnam border seized 143 pieces of ivory weighing up to 5.155 kilograms (about 11.3 pounds) at the Dongxing Port.

One Vietnamese national tried to bring 59 ivory pieces weighing 1.56 kilograms (about 3.4 pounds) through the port.

Teeth of rare animals are favorable items for smugglers to sell on the black market. According to a July 13 report by China News, customs officials at Hohhot, the capital of Inner Mongolia, seized 149 teeth of brown and black bears. The market value for the seized teeth was estimated to be around 300,000 yuan (about $44,725).