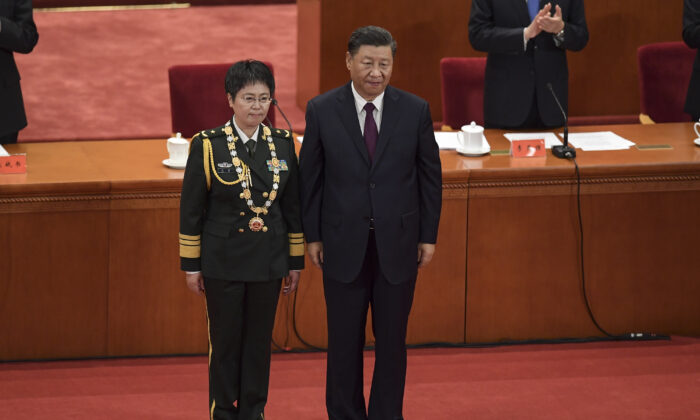 Maj. Gen. Chen Wei (L) receives an award from Chinese leader Xi Jinping during a ceremony to honour people who fought against the pandemic, at the Great Hall of the People in Beijing on Sept. 8, 2020. (Nicolas Asfouri/AFP via Getty Images)
Canada

The COVID-19 vaccine developed by Chinese company CanSino, which Ottawa partnered with before the deal fell through, used technology developed in a 2016 paper on Ebola by a now-fired scientist from a government laboratory in Winnipeg and a Chinese major general, according to an expert.

The government’s partnership on the clinical development of the CanSino vaccine, first announced on May 12, 2020, fell apart on Aug. 26, 2020, after Beijing blocked the shipment of the vaccine to Canada.

CanSino’s vaccine was developed in partnership with China’s People’s Liberation Army, an effort that was led by Maj. Gen. Chen Wei, a military medical scientist. Chen was lauded by Chinese leader Xi Jinping in September 2020 and honoured in a ceremony for her role in developing the vaccine.

Dr. Xiangguo Qiu, a scientist at the National Microbiology Lab (NML) in Winnipeg who has since been fired, has collaborated with Chen, and the two have published their research in scientific journals, including one in 2016 on an adenovirus vaccine for Ebola. A 2017 correction to the paper says Qiu and Chen “contributed equally to this paper.”

Qiu and her husband and fellow scientist Keding Cheng, along with a group of Chinese students, were escorted from the NML in July 2019 amid a police investigation. The couple was formally fired from the lab in January 2021.

The federal government has refused to provide details of why Qiu and Cheng were fired, citing privacy and national security concerns.

Joe Wang, who formerly spearheaded a vaccine development program for SARS in Canada with one of the world’s leading pharmaceutical companies, says it’s clear the CanSino COVID-19 vaccine is based on the same adenovirus technology described in the 2016 paper by Qiu and Chen. Wang is currently the president of NTD Television Canada, a sister media outlet of The Epoch Times in Canada.

“Both the Ebola vaccine [described in the paper] and CanSino’s COVID vaccine are recombinant vaccines. A recombinant vaccine is a construct of an antigen genetically engineered into a vector. One can have the same vector with different antigens targeting different pathogens,” Wang said.

“In the case of the CanSino COVID vaccine, it uses an adenovirus vector technology similar to the one used for Ebola.”

In addition, Wang says, CanSino’s CEO and co-founder, Xuefeng Yu, is also listed as an author of the paper.

Yu, a McGill graduate, worked at the Canadian offices of the major pharmaceutical company Sanofi Pasteur from 1998 to 2010, with his last position there being director.

Conservatives have criticized the Liberal government for partnering with the Chinese company in vaccine development, saying it raises security concerns and also contributed to Canada’s slow vaccine rollout compared to other countries.

“CSIS [Canadian Security Intelligence Service] had been flagging CanSino as a national security threat for years, but the Liberals turned a blind eye to our Canadian experts,” Tory Leader Erin O’Toole wrote in a December 2020 commentary in the National Post. “After undoubtedly extracting useful Canadian vaccine research, China broke off relations and refused to ship samples.”

The Liberals have defended their deal with CanSino, saying they signed deals with other manufacturers before the CanSino partnership fell through.

“We put all our eggs in as many different baskets as possible, and that is how we have the most diverse portfolio of vaccines and more doses potentially per capita than any other country in the world. We have been there for Canadians,” Prime Minister Justin Trudeau said in the House of Commons on Dec. 2, 2020.

Before she was terminated from her position at the NML, Qiu travelled to China’s Wuhan Institute of Virology (WIV) in an official capacity several times and provided training on level 4 lab safety. She also arranged the shipment of Ebola and Henipah virus samples to WIV from NML in March 2019, with permission from NML authorities.

A spokesperson with the Public Health Agency of Canada, which oversees the NML, previously told The Epoch Times that the samples were sent to WIV for the purposes of scientific research.

When asked if there were any intellectual property-related agreements before samples were sent, spokesperson Mark Johnson said, “It was determined that intellectual property protections were not required for the sharing of these samples given that the purpose of the transfer was to facilitate research to benefit human health and advance scientific inquiry on preventing and treating infectious diseases.”

Qiu and Maj. Gen. Chen, who is a leading bioweapons expert at China’s Academy of Military Science, published another scientific paper on the Ebola virus submitted to the journal mAbs in January 2020, with Qiu’s affiliation with the NML listed in her credentials. This was after July 2019 when Qiu and her husband were escorted out of the lab, but before they were formally fired.

Conservatives have asked the Liberal government whether Qiu and Cheng passed on any intellectual property to China.

“Did the two Canadian government scientists fired from the Winnipeg lab pass on Canadian intellectual property to China, including to the Wuhan Institute of Virology?” Michael Chong, a Conservative candidate who is seeking reelection in Wellington-Halton Hills, said in a statement on Sept. 17. Chong was the Conservatives’ foreign affairs critic before the election was called.

Despite repeated requests by opposition parties, the Liberal government has refused to provide details of why Qiu and Cheng were fired from the NML, citing privacy and national security concerns.

MPs in the House of Commons issued an order requiring the government to disclose the information, but the government took the Speaker of the House to court to withhold the documents. The government dropped the court case after an election was called on Aug. 15 and the Parliament was dissolved.

The Tories are accusing the Liberals of calling the election to hide the details of what happened at the NML and reports of collaboration with Maj. Gen. Chen.

“We now know why Justin Trudeau called this early $600 million election, risking the health of Canadians in the middle of a fourth wave of the pandemic: to prevent the release of the Winnipeg lab documents to Parliament, and cover up what happened at the Winnipeg lab,” Chong said.

The Liberal Party didn’t immediately respond to a request for comment.