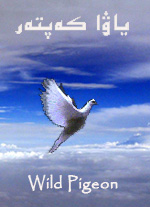 WASHINGTON — Chinese authorities have jailed the chief editor of the Kashgar Literature Journal for publishing a fable they regard as a veiled indictment of China’s heavy-handed rule in the northwestern Xinjiang Uighur Autonomous Region, Radio Free Asia (RFA) has learned. The author of the story is already serving a 10-year jail term for inciting separatism.

Korash Huseyin, 35, is chief editor at Kashgar Literature Journal, according to several sources inside Xinjiang who spoke to RFA’s Uighur service on condition of anonymity. He and his wife have three children.

A court in the southern Xinjiang city of Kashgar has sentenced him to three years in jail for publishing the original short story “Wild Pigeon” by Nurmuhemmet Yasin, currently serving a 10-year sentence for inciting Uighur separatism by writing it.

Both Yasin and Huseyin belong to the Muslim Uighur ethnic group that accounts for most of the population in Xinjiang, a vast territory rich in mineral resources and of great strategic importance to Beijing on its northwestern borders. No further information about the case was immediately available, and a police official contacted by phone Thursday declined to comment.

“This kind of matter, we don’t open it to the outside,” the official said. Asked if police had arrested Huseyin, the officer replied, “We don’t know” and hung up the phone.

The Kashgar Literature Journal published “Wild Pigeon” in late 2004. Apparently reading the story as a tacit criticism of Chinese rule in the region, Kashgar police arrested Yasin, on Nov. 29, 2004.

At the time of his arrest, authorities confiscated Yasin’s personal computer, which contained an estimated 1,600 poems, commentaries, stories, and one unfinished novel, according to sources in the region.

Yasin, born March 6, 1974, is married with two young sons. His story, titled “Yawa Kepter” in the Uighur language, translates literally as “untamed or wild dove” or “untamed pigeon,” as Uighur uses the same word for both species.

The story is the fictional first-person narrative of a young pigeon—the son of a pigeon king—who is trapped and caged by humans when he ventures far from home.

In the end, the narrator commits suicide by swallowing a poisonous strawberry rather than sacrifice his freedom, just as his own father committed suicide under similar conditions years earlier.

“The poisons from the strawberry flow through me,” the unnamed pigeon remarks to himself at the end. “Now, finally, I can die freely. I feel as if my soul is on fire—soaring and free.”