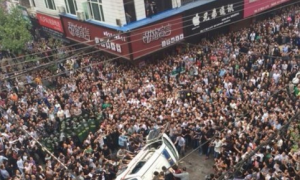 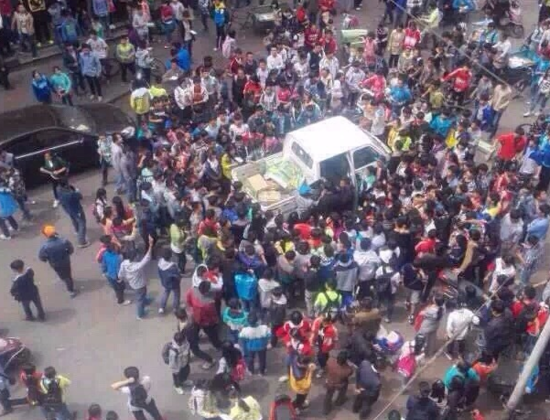 China’s urban bylaw enforcement officers, known in Mandarin by the abbreviation “chengguan,” are notorious for their violent behavior, especially when it comes to dealing with the urban poor. They commonly menace, beat, and sometimes kill street vendors suspected of violating municipal regulations.

When a horde of secondary school students from the Zhaoyang District No. 1 Secondary School flooded the streets to defend an elderly female peddler selling bananas, the chengguan found the tables turned on them.

Witnesses at the scene, which took place in the mountainous southwestern Chinese province of Yunnan took photos and uploaded them to Chinese social media sites such as Sina Weibo. One caption describes the scene:

“Chengguan of Zhaoyang District bully defenseless grandmother, smashing her tricycle and bananas before the school campus. Attempt to beat the senior citizen foiled by encirclement by almost 1000 students.”

On April 16, the date of the incident, the elderly woman had gotten into an argument with five chengguans. The officials’ unseemly behavior while trying to clear a street outside a secondary school in the city of Shaotong prompted the school pupils to come out in force.

Almost a thousand students poured out of the school campus to drive out the black-uniformed chengguans, as reported by Haiwai Net, a mainland Chinese news site.

The incident occurred right after school had closed, just as students were leaving campus. Another photo shows a mass of students surrounding the chengguans’ vehicle, which contained boxes of bananas the officers confiscated from the vendor.

According to an eyewitness, the chengguans got into their vehicle when it became apparent that the students did not come in good faith. The students began throwing basketballs and soccer balls at the vehicle, which the chengguans drove onto school grounds to get help.

“Students, I salute you. Your encirclement and attack was awesome. You express the heartfelt will of all Chinese vendors and the dignity of the whole Chinese people. You are our future, you are true Chinese.”

On April 17, the local urban administration said in an announcement that the officers had done nothing wrong “in the process of law enforcement” and suggested that other vendors had incited the students to attack the chengguan. Two chengguan were reportedly injured.

This is not the first time Chinese have struck back against the chengguan, nor is it an isolated case for Yunnan Province.

In November 2014, around a thousand peasants in Yunnan’s Fuyou Village involved in a land dispute with local authorities faced down hundreds of police and hired thugs sent to suppress their protests. Several villagers were killed in the ensuing violence, but they repelled the assault through force of numbers. A group of captured attackers were then publically doused with gasoline and burned to death.

Some Fuyou residents compared the local authorities with the Japanese invaders in World War II.

Earlier that year, over a thousand angry residents in the coastal province of Zhejiang surrounded a van operated by chengguans when they were led to believe that the officers had beaten someone to death. Their path of escape cut off, the five chengguans were killed by the mob.

“How were the vendors able to incite the students while the chengguans failed?”