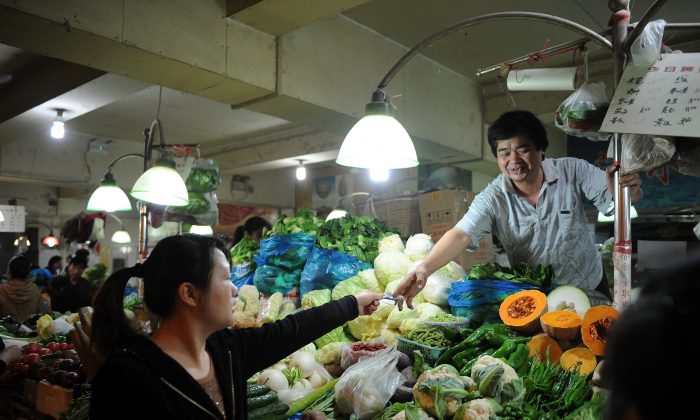 A vendor sells vegetables in a market in Shanghai on Oct. 18, 2012. Prices for inputs are rising across the country, squeezing ordinary Chinese people, according to recent economic statistics and expert analysis. (Peter Parks/AFP/Getty Images)
China

Though the Chinese Communist Party (CCP) controlled media tries to counter rumors of price increases, prices for food, energy, water and housing are undeniably on the rise. Some experts and scholars question whether the CCP is releasing false statistics for political purposes.

Chinese people are becoming extra prudent in their spending, and becoming more cynical about the reliability of official data. As long ago as November 2010, in an online survey with almost 20 million participants, 86 percent voted that they felt that the consumer price inflation data did not match their own perception of prices, and that prices rose far more than inflation data claimed, according to a report from Xinhua, a state mouthpiece.

Yale professor of finance Chen Zhiwu wrote in a March 12 article that the official inflation figures are hard to believe. He said that “the Chinese regime is creating superficial economic prosperity, but the inflation caused by artificially printing money the government is effectively taking money out of the hands of ordinary people. It’s a kind of plunder.”

Fuel price increases have pinched China’s transportation sector, with taxi drivers complaining and in Zhejiang Province going on strike on May 1.

Frightened by rumors of a substantial price increase, consumers rushed to buy natural gas before the price rose. On the evening of March 27, the CCP National Development and Reform Commission denied the rumors that natural gas prices were going to rise sharply, but then raised them suddenly, as much as 40 percent in some areas.

Increases in the price of water have also been predicted. State-run media reported that Wang Wenke, Chairman of the China Water Industry Investment Co. Ltd., estimated a water price increase of 10 times current levels, or 30 to 40 yuan per tonne. Xinhua reported the authorities saying that consumers should expect a 36 percent increase.

Water price adjustments have taken place all over the country, according to Fu Tao, director fo the Tsinghua Water Police Research Center, speaking to Time Weekly. Despite the apparently public hearings, however, people can’t make sense out of the official publications, he said.

Food prices, directly dependent on fuel and water prices, increased accordingly. On May 9, the Bureau of Statistics released April’s economic data that showed food price increases in vegetables, fruits, and seafood prices were the greatest, with some vegetable prices rising by over 24 percent in early April.

Non-food prices also continue to rise. New restrictions in the housing market may cause some home buyers to turn to the rental market instead, thus pushing up rental prices, recently released data from the Bank Financial Research Center shows.

Zhang Xu, a real estate market researcher, told the Chinese press that rapidly rising rents since 2009 have pushed the cost of rentals to the limit that the majority of low-income families can afford. In 2012, the increase dropped to about 10%, but he indicated that annual increases will stabilize at about that level.

The continual increase in the cost of living has caused the average citizen to carefully budget and feel unprecedented pressure, according to interviewees. Low income families are hit especially hard, and are reaching the limit of what they can pay.

Mr. Lin, a Beijing resident, told The Epoch Times: “My parents go to the supermarket every day in the morning and evening, sometimes sitting on a bus for an hour, just to buy vegetables and fruits that are on sale.”

Longtime Shanghai resident Ms. Guo expressed her frustration: “These past few years, housing prices have risen too fast to purchase, and rent prices have doubled. Next month I am going to move out of the city even farther; it will take me longer to get to work, but the rent is cheaper.”

“Wages are definitely not going up as fast as consumer prices. Sometimes I go to the mall to look around, but I can’t afford anything. After paying for necessities, there isn’t much money left over. Sometimes, I even have to borrow money,” Mr. Shen, a Suzhou designer, told The Epoch Times.

Mr. Liu and his wife from Fushan City have a four-month-old baby. He said in a telephone interview: “Life is no easier in the smaller cities. For example, milk powder in China is unsafe, so we buy a Japanese brand that costs 298 yuan ($48.52) per can.” He says that more than half his monthly wage is spent on expenses for the baby.