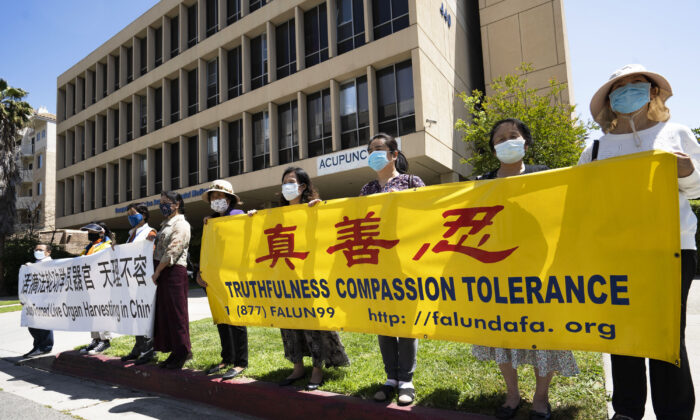 Falun Gong practitioners hold banners at a rally calling for the halt to a slanderous media campaign in Hong Kong, in front of the Chinese consulate in Los Angeles on May 3, 2021. (Debora Cheng/The Epoch Times)
Southern California

LOS ANGELES—About 180 practitioners of the spiritual discipline Falun Gong gathered in front of the Chinese Consulate in Los Angeles on May 3 to call for an end to a slanderous media campaign in Hong Kong.

The protesters quietly rallied for more than an hour, bearing signs that read “truthfulness, compassion, tolerance”—the main tenets of the practice, also known as Falun Dafa—while about 20 cars with Falun Gong decorations circled the rally.

The protest was sparked by a recent editorial from Ta Kung Pao, a pro-Chinese Communist Party (CCP) newspaper in Hong Kong that published eight articles slandering Falun Gong and called on the government to ban the spiritual practice in Hong Kong.

Almost 22 years ago, the CCP launched a brutal persecution campaign against Falun Gong in China; at that time, up to 100 million people in China were practicing Falun Gong, according to official estimates. Since then, adherents have been arrested and tortured within the country’s prisons, labor camps, and psychiatric wards in an effort to force them to renounce their faith.

Wu Yingnian, a professor of statistics at the University of California–Los Angeles, said he’s “deeply concerned” about Falun Gong practitioners in Hong Kong, because when the CCP launches a political persecution, it usually starts with propaganda.

“We all know that Ta Kung Pao is a propaganda mouthpiece for the communist regime,” Wu told The Epoch Times.

Wu called the articles a “signal for the persecution” of Falun Gong in Hong Kong.

He said on July 20, 1999, when the CCP initiated the persecution of Falun Gong, state-run media in China broadcasted programs that directly attacked and spread false information.

Following a month-long media campaign to demonize the practice, the CCP persecuted many adherents to death, Wu said.

“This type of behavior is very concerning,” Wu said. “We are actually calling for the international community, and also Western governments, to really help us to stop the persecution in Hong Kong.”

Hunter Wang says he was arrested six times and thrown into a labor camp for three years for practicing Falun Gong. His wife was sentenced to seven and a half years in prison for refusing to renounce her belief, he said.

“[Ta Kung Pao] disregards the basic truth that Falun Gong is a good cause and benefits the country and the people,” he told The Epoch Times.

Wang said the news outlet’s smearing of Falun Gong “not only ignores the basic professional ethics of journalists, but also helps to endorse the CCP’s persecution of Falun Gong in Hong Kong.”

He added: “I strongly condemn the slander of Falun Gong by the Hong Kong Ta Kung Pao, and solemnly request the Ta Kung Pao to withdraw the slanderous article and apologize publicly.”

The slanderous propaganda copies the tactics used in mainland China at the start of the 22 year-long persecution, according to Youfu Li, the president of the U.S. Southwestern Falun Dafa Association.

“It was brought to Hong Kong to repeat the persecution,” Youfu told The Epoch Times.

“The CCP’s purpose is to promote and expand its tactic abroad, such as Taiwan, Myanmar, Indonesia, and Thailand, and it does so.”

He said the CCP is “going down a dead end, because people all over the world understand [its nature], and will unite, reject it, and end its evil rule.”

Helen Lee, spokesperson for The Global Service Center for Quitting the Chinese Communist Party in Los Angeles, says the articles made “baseless claims” against Falun Gong.