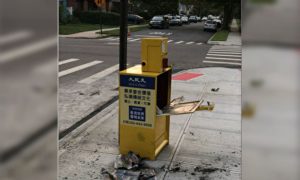 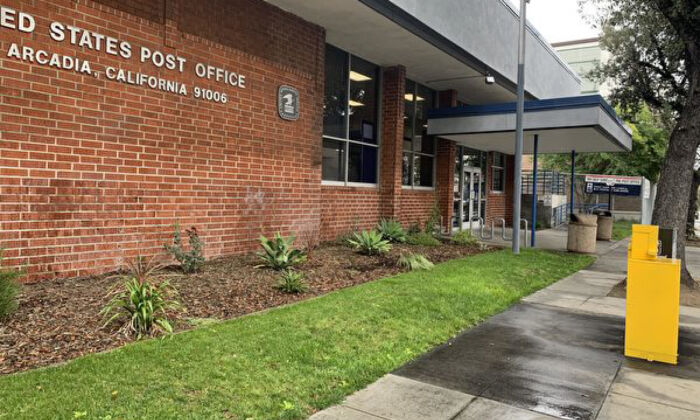 A young woman was collecting data at a local Chinese-language Epoch Times newspaper vending box in Los Angeles County, California, on April 12, claiming that it was being done at the direction of the “Chinese consulate,” a witness reported.

The witness, surnamed Xue, immigrated to the United States over 30 years ago and lives in Arcadia, a Los Angeles city with a large Chinese immigrant population. She has been reading the paper for 10 years.

Xue went to buy a copy of the Chinese-language Epoch Times in the newspaper box outside a post office on Wheeler Street in the morning of April 12.

In a phone call on the same day, she told The Epoch Times that after parking her car, she soon noticed a young “university-student-like” lady who was standing by the vending box and looking around.

“It’s a young ethnic Chinese lady with a book and pen in her hand, seemingly taking notes,” she said.

Xue approached and asked what she was doing.

The girl froze for a moment and then blurted out: “I’m recording,” Xue recalled.

While being asked about the content of her notebook, the girl did not answer her question directly but said: “The Chinese consulate asked me to make a record.”

“[The girl] was not defensive,” said Xue, but then she seemed to become alert and asked Xue’s identity. While communicating in English, Xue found the girl spoke with a mainland accent.

Xue said the experience left her with not a good feeling because the Chinese Communist Party (CCP) was openly collecting data and information about overseas Chinese communities.

Overseas Chinese student bodies have engaged in Beijing’s influence efforts worldwide, most of which operate under the guidance of Chinese embassies and consulates, the Australian Strategic Policy Institute reported in 2020.

Many Chinese Students and Scholars Associations also openly admit in their charters that they are directed, supported, or financed by local Chinese consulates.

When asked by The Epoch Times whether Xue saw what was written in the book, she said she saw only street numbers in the address format. “There were many of them,” Xue said.

The Chinese-language edition of The Epoch Times was founded in 2000. It is known for being free of Beijing’s censorship and infiltration and offering copies at no cost on major thoroughfares overseas in the past decades. However, due to paper theft and abuse, vending boxes were introduced in recent years, charging 50 cents per copy.

The recent attack on the printing press of the Hong Kong edition, which is believed to be orchestrated by the CCP, raised Xue’s concerns over the possibility of a systematic operation against The Epoch Times in the United States. “So I wanted to tell you about it [the suspicious note-taking].”

She added, “You can disagree, but you can’t destroy. Everyone has the right to choose what to read.”

In the early hours of April 12 in Hong Kong, four vandals barged into the printing plant of the Hong Kong edition of The Epoch Times, where they damaged computers and printing equipment with sledgehammers and construction debris, such as concrete, stone, and powder.

The Hong Kong edition was forced to temporarily halt operations, and said it hoped to return to full operation on Friday.

The Hong Kong edition of The Epoch Times condemned the CCP in a statement, for creating “white terror” in Hong Kong.

In August 2019, several boxes were found to have been sabotaged in Queens, New York, with the coin slots jammed, preventing people from paying for and retrieving newspapers. One box was set on fire on August 19, 2019.

In September 2020, dozens of newspaper boxes were repeatedly spray-painted, knocked over, or lost papers.

Outside the post office on Monday, Xue tried to warn the girl about spying for the CCP in the United States. “It’s a shame to help the Chinese Communist Party,” Xue said, which agitated the woman.

The woman shouted, “I don’t need to know this,” before fleeing the scene, according to Xue.

“She got so loud then,” Xue said, adding that the woman drew the attention of many people at the post office.