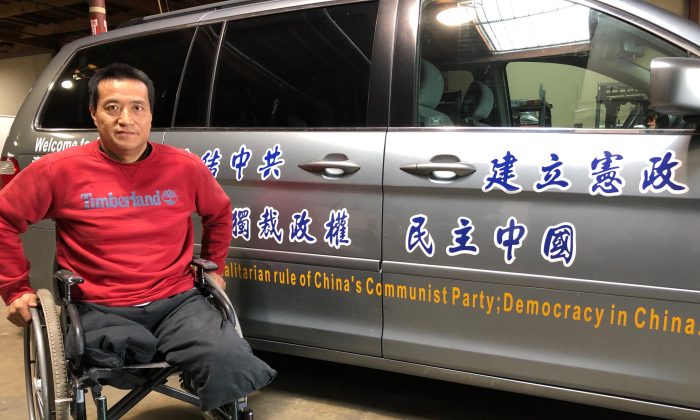 SAN FRANCISCO—Fang Zheng, an American citizen whose legs were crushed by a tank during the 1989 Tiananmen Square Massacre, has been denied entry to China for his father’s funeral since Feb. 7.

The Tiananmen Square Massacre occurred on June 4, 1989, when the Chinese Communist regime used tanks, troops, and assault rifles to kill thousands of students in order to end the student-led demonstration for freedom and democracy in Beijing’s Tiananmen Square.

The massacre has been a forbidden topic in China, and information related to it has been under strict government censorship.

Fang was one of the students in the demonstration; he was in a group of students withdrawing from Tiananmen Square when a tank caught him from behind and crushed his legs.

This year will be the 30th anniversary of the massacre, as well as the anniversary for Fang’s loss of his legs.

Fang came to the United States in 2009 with a travel visa prior to the 20th anniversary of the massacre, and later became an American citizen after being recognized as a political refugee.

Prior to coming to the United States, Fang had been outspoken about the bloody truth of the massacre. He was arrested twice by Chinese authorities before he left China.

Fang is the chairman of the Chinese Democratic Education Foundation (CDEF), a California-based nonprofit group that works toward a path for democracy for China.

Fang learned Feb. 3 that his father had passed away earlier that day in Hefei City, China.

Fang and his family drove an hour to the San Francisco Chinese Consulate General on Feb. 6, and spent an entire day there going through the visa application process. They left the consulate at the end of the day and were told to come back the next day to pick up their visas.

Fang and his three daughters are U.S. citizens, while his wife is a permanent resident in the United States. Since one of his daughters went back to China with his wife in 2016, and still holds a valid visa, Fang only needed visas for himself and two of his daughters.

On Feb. 7, Fang went back to the consulate. With the help of friends, Fang got the visas he needed. He paid $495 for the expedited process.

Having doubts about the caller’s identity, Fang and his friends called the consulate, but were unable to reach any consulate personnel by phone.

Fang said it was not easy for him as a handicapped person to go to the consulate. He can walk with prostheses, but the steep slope outside the consulate’s front door was too challenging for him. With help from his friends, he went up the slope in his wheelchair the morning of Feb. 12.

Fang asked the consulate worker at the information desk to verify if the phone call was indeed made by anyone from the consulate, and the reasons for the cancelations of the visas.

The consulate worker went upstairs to check with her superior, and came back to confirm the cancelations of the visas, but refused to answer any other questions.

Fang insisted to speak to someone in charge of the visa process, but the consulate worker sent security to ask him to leave.

The security guard told Fang to go outside of the building and reenter from a side door to request to speak with someone in charge.

Fang and his friends followed directions and went to the side door, but nobody answered the doorbell or responded to their knocking on the door.

As of now, Fang hasn’t received any further explanations from the consulate.

Fang’s father was 80 when he passed away. He visited Fang in the United States in 2012. Since then, Fang hasn’t seen his father.

Fang and his daughters are still hoping and waiting for the visas to go to China to say their final farewells to Fang’s father, and to bury his ashes.