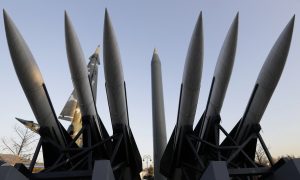 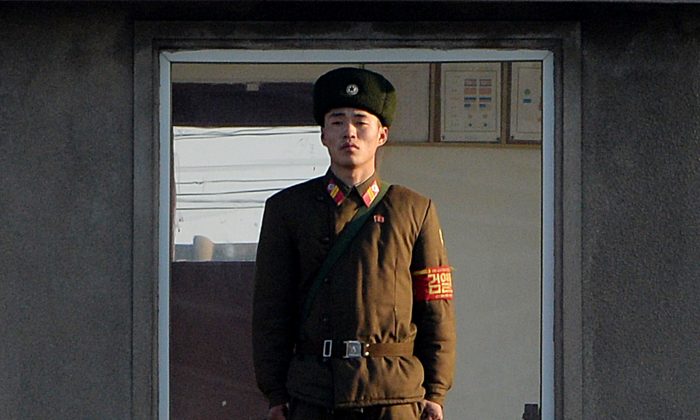 A North Korea soldier stands guard on the banks of the Yalu River which separates the North Korean town of Sinuiju from the Chinese border town of Dandong on Dec. 17, 2013. On Dec. 27, 2014 a North Korean soldier crossed the border into China and killed four Chinese villagers, apparently while seeking food. (Mark Ralston/AFP/Getty Images)
China

Recently, a North Korean soldier crossed the border into China and robbed and killed four villagers. After the incident, Chinese media reported that it is not uncommon due to famine for North Koreans to cross the border to steal food and even kill villagers. The incident has led to vehement discussions on China’s Internet and condemnation of the local government’s serious dereliction of duty.

On Dec. 27, 2014, a North Korean deserter dressed in a military uniform crossed the border and entered China’s Nanping Village in Jilin Province’s Long City to rob 100 yuan (US$16) and murder four villagers. He was shot and arrested by Chinese police, and is currently in a coma.

Although the incident occurred in China, it was first reported by the South Korean media.

The four villagers killed by the deserter were two couples surnamed Li and He respectively. What’s strange was that these two couples were ethnic Koreans who were supposed to be able to communicate with the deserter in Korean language, but nonetheless were killed. However, another villager surnamed Che who was a Han Chinese survived the incident because he could not speak the Korean language.

Although the incident occurred in China, it was first reported by the South Korean media.

When asked by a reporter about the case at a regular press conference, Chinese Foreign Ministry spokesperson Hua Chunying admitted that the incident did happen. Hua said that the Chinese authorities have made representations to North Korea, and that the public security department would handle the case.

Due to an increasingly worsening famine in North Korea, hungry North Korean soldiers and residents have often crossed the border and broken into Chinese villagers’ houses to steal food and money, even taking domesticated pigs and chickens, and so on. During the robberies, murders have occurred from time to time.

According to the Beijing News, a village cadre in Nanping Village said that as the border is just across the river from the village, “North Koreans have often crossed the border to rob,” and “on Sept. 3 last year, a North Korean even killed three people in a family in the village.”

Mr. Yong, a member of a victimized family confirmed that at 1:30 a.m., on Sept. 3 last year, his 64-year-old father-in-law, 60-year-old mother-in-law and their 25-year-old son were killed by a North Korean who crossed the border and broke into their home.

“The man broke a window, and used a hammer to beat them to death,” Mr. Yong said, “though the case has been solved, nothing has been mentioned about compensation so far,” A Beijing News’ reporter made several phone calls to the Propaganda Department of Long City’s Communist Committee and local police, but no response had been received by press time.

“They often come over, asking for money, for food. They have weapons on them, and we are afraid and must give to them,” Mr Yong said.

Mr. Yong said, people in the village are scared, and they move out of the village if they can. Those can’t afford to move put on a steel door, including Mr. Yong’s in-law family, but it still can’t stop the robbery and killing.

It is said that today’s China is strong, but it can’t even protect its people. My tears came down when thinking about this.

A village cadre said, in recent years many people were killed in the village and in the nearby villages. They wish media would report on this and figure out a way to provide the people in the village a sense of security.

These killing cases caught a lot of attention on China’s internet. Internet users ridiculed the relationship between North Korea and China, and criticized the state for its serious dereliction of duty.

The following is some comments posted on the internet:

“Protecting the citizens is the most basic of a government’s duties.”

“How is the state border managed? What is the duty of soldiers stationed at the border?”

“It is said that today’s China is strong, but it can’t even protect its people. My tears came down when thinking about this.”

“Chinese people were killed many times, but no one discovered it?”

“Whose fault is it? Who protected a rogue country?”

“If no foreign media reported this, we would not know this kind of thing has become a norm. Blocking the information to our own people is incompetent and shameless.”

“It is said North Korea is a dog we keep? It is a mad dog, which should be killed.”